Concord Dawn
Fenn Rau is a minor character in the Disney XD animated series Star Wars Rebels. He was a male Mandalorian who served as the Protector of the planet, Concord Dawn, during the reign of the Galactic Empire. Fenn Rau eventually joined the Rebel Alliance after being inspired by the courage and loyalty of Sabine Wren, a fellow Mandalorian and member of House Vizsla.

During his debut Phoenix Squadron under the leadership of Hera Syndulla sent a squadron of fighters to Concord Dawn to negotiate with the Mandalorians. Since the protectors did not want to oppose the Empire, they attacked the rebels and forced them to flee. Hera was seriously injured. A short time later Kanan Jarrus and Sabine Wren returned to the system and infiltrated the base of the protectors on Concord Dawn's third moon. While the Jedi negotiated with Fenn Rau and thanked him for the support in the Battle of Mygeeto, Sabine placed explosives on the Gauntlet Star Hunters of the Mandalorians to destroy them in the event of a failure of the negotiations. In the process, however, she was asked to fight with the leader, Fenn Rau. During the next battle, Sabine managed to destroy all the starfighters, except for one, and escaped with the phantom. Rau climbed into the remaining hunter to stop the rebels. Kanan jumped to the hunter and struck Rau unconscious. Then he took him prisoner aboard the phantom. Shortly thereafter, Fenn was contacted by a Mandalorian under his command, whom he ordered to allow the Rebels safe passage through the Concord-Dawn system and deny his capture to the Empire because he did not want the Imperials to occupy his territory. After the Rebels returned to the fleet, they locked the Fenn into a cell until he was ready to cooperate.

While he remained in custody of the Rebels, Fenn still refused to join the fight against the Empire. But when contact with the Protectors of Concord Dawn was lost, he volunteered to investigate with Sabine, Ezra, and Chopper. They arrived to find the Fenn's base destroyed, all his men killed by Imperial Super Commandos Mandalorians loyal to the Empire, led Gar Saxon. He came to see the ruthlessness of the Empire, and ultimately saved Sabine, Ezra, and Chopper from the Mandalorians. Impressed at their devotion to their cause, he finally agreed to join the Rebellion.

Fenn Rau is the assist character for Sabine Wren, available as a Unique card.

Fenn Rau, a prisoner of the Rebellion 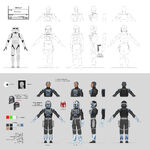