“And if you remember, I don't miss.”
―Fennec to the Mandalorian[src]

Fennec Shand is the antagonist turned anti-hero of the Star Wars franchise, making her debut in The Mandalorian. Upon the formation of the Galactic Empire, Fennec was a new member of the Bounty Hunter's Guild. Now a feared assassin working during the era of the New Republic, Fennec remained hidden on the planet Tatooine after the arrest of her employers where she crossed paths with the bounty hunter Mandalorian Din Djarin aka Mando who was almost fatal to her until she was saved by Boba Fett with whom she now works as a partner.

“Fennec Shand is an elite mercenary. She made her name killing for all the top crime syndicates, including the Hutts. If you go after her, you won't make it past sunrise.”
―Din Djarin about Fennec Shand's reputation.

The extent of Fennec's personality is unknown other than her reputation as a feared and ruthless dangerous assassin, having no qualms about even shooting a child if she had to. She also turns out to be very cunning and manipulative, using Toro Calican's ego to turn on Mando, although her real aim was to kill the young bounty hunter after he frees her by feigning. an alliance but it's done shot in the abdomen instead when Toro realizes her true plan, showing that she underestimates her opponents too much.

Despite her coldness and immoral deeds, Fennec has a certain sense of honor, becoming a reliable ally of Boba Fett after she is saved her life. She subsequently became an ally with her former enemy Mando when they helped each other on Tython and continued to ally until Grogu was rescued. She is also not devoid of sympathy, freeing a female slave during the capture of Jabba's palace.

In "The Gunslinger", Having to acquire money for repairs to his ship, Mando agrees to form an alliance with novice bounty hunter, Toro Calican, to capture Fennec who is hiding on Tatooine in exchange for the credits. Upon stumbling upon another dead bounty hunter in the Dune Sea, Mando is hit by the shots of Fennec's MK snipers rifle from the heights but protected by his beskar, he takes cover with Toro and decides to wait until nightfall. to surprise the assassin because they are not to the advantage during the day.

At nightfall, the duo rush at Speeder towards Fennec who tries to shoot them down before the Flash charges of the Mandalorian blind the vision of her helmet but she still manages to detonate Mando's speeder after that. Toro appears behind her with his gun pointed at his head, only for the woman to disarm him and physically dominate him until Mando joins the scene, holding Fennec at bay. The handcuffed assassin, Mando is forced to leave Toro watched over Fennec after the recruit refuses to leave the Mandalorian with "his bounty." At dawn, Fennec attempts to manipulate Toro into revealing Mando's betrayal of the Bounty Hunter Guild on Nevarro and that the two of them could get the better of him. While Fennec seems to have managed to convince him, Toro shoots her in the abdomen, realizing that she would have killed him if he had untied her. Mando later finds Fennec's seemingly lifeless body and realizes that Toro has overtaken him.

The next night after Toro is killed by Mando, an unknown man approaches Fennec's remains.

In "The Tragedy", Boba Fett confronts Mando to retrieve his armor, accompanied by Fennec whom he has tasked with keeping Grogu, an individual of Yoda's species under Djarin's protection, in her sights. Beginning a compromise, Mando questioned Fennec about her survival and she revealed that Boba was the person who found her in the desert before replacing her injuries with cybernetics, causing Fennec to owe Fett a life debt. They are then caught off guard by a sudden arrival of stormtroopers from the remnant of Moff Gideon.

Ambushing from the heights, Fennec brought down several stormtroopers and destroyed a heavy blaster by rolling a boulder over it. As the skirmish heats up, she finds herself surrounded with Mando by enemy soldiers, but Boba's sudden arrival in his Mandalorian armor turns the tide. Although they are held firm, Mando's ship is destroyed and Grogu is captured by the Dark Troopers. Boba chases them but gives up when he discovers the cruiser and therefore the return of the empire, to Fennec's disbelief because the New Republic is supposed to be under surveillance in this sector. With the loss of Grogy, Boba and Fennec swear to help Mando get his adopted son back as a thank you for returning Boba's armor.

In "The Believer", After recruiting the ex-imperial, Migs Mayfeld, Fennec accompanies the group to the planet Morak where an underground Imperial refinery could give them Gideon's position. When Mando suggests that Fennec take the place of Cara Dune to infiltrate the refiner, Fennec contradicts the idea because it is wanted by the BSI and would quickly be unmasked. Finally, Mando and Mayfeld take the infliction part of the mission while Fennec and Cara stay in cover. The two men end up unmasked after recovering Gideon's location but with the help of Boba, Fennec, and Cara, they manage to escape.

In "The Rescue", After additional recruiting of Bo-Katan Kryze and Koska Reeves and the capture of Doctor Pershing, The group begins Gideon's Light Cruiser infiltration plan. With Boba pretending to shoot them while they are aboard a Lambda shuttle to fool the Imperial remnant, Fennec, Bo-Katan, Cara and Koska launch a violent offensive on the Imperials while Djarrin goes to the cells of detention to save Grogu. Once in the checkpoint, the five women realize that Gideon is not there. Mando later joins them with a captive Gideon and a rescued Grogu. Unfortunately, the Dark Troopers storm the checkpoint, the group being separated from the droids only by the armored doors giving way. Suddenly an X-wings enters the cruiser and the pilot destroys several Dark Troopers all by himself with a lightsaber and the Force. In a final attempt, Gideon shoots Bo-Katan and Mando while wanting to shoot down Grogu before being held in play by Fennec, Koska and Cara and then being knocked out by the ex trooper while attempting to kill himself. The mysterious individual then joins the group, revealing himself to be Luke Skywalker, having been contacted by Grogu on Tython. Fennec subsequently witnesses the farewell between Mando and Grogu when the Mandalorian lets the child follow Luke and R2-D2.

Fennec later storms Jabba's palace, slaughtering Bib Fortuna's men and freeing a slave once in the process. Boba joins Fennec and kills himself the late Jabba's former valet before sitting on his throne with Fennec sitting next to him drinking Spotchka.

More than two decades earlier, Fennec was contacted by Raspar Six who informed him of the presence of a young girl named Omega on Pantora that Fennec had been tracking for some time. Fennec meets Omega as she accidentally split with her friends, skillfully gaining her confidence until Hunter intervenes, allowing Omega to escape while the bounty hunter and ex-sergeant trooper briefly engage in unarmed combat. Fennec continues to stalk Omega in town, catching up with her at a communications tower and attempting to flee by vehicle until Hunter retrieves the girl. Once her target out of Pantora, Fennec paid Six to inform her if the Bad Batch ever came back here before informing her employer that she will going to continue pursuing Omega.

Alerted by Kaminoan Nala Se who is also her secret employer, that Omega has been captured by Cad Bane, Fennec intercepts the veteran bounty hunter on Bora Vio. She immediately assassinates Taun We who came to hand over the bounty for the capture of Omega and then confronts Bane personally before arriving the site where Taun We was murdered. With Bane knocked out by an explosion, Fennec again encounters Omega in the disaffected cloning facility on the planet where she tries to claim Omega by explaining she's trying to help her. However, the girl remains suspicious of Fennec and refuses to trust her since the incident on Pantora before she escapes her after a failed attack from Bane's droid, Todo 360. Bane returns to attack Fennec, turning out to be more of a match against her. Clone Force 99 manages to rescue Omega during the clash, so Fennec escapes from Bora Vio after sabotaging Bane's ship so he cannot pursue her or the clones. She then contacts Nala Se to ask for her payment for having been able to prevent Omega from being brought back to Kamino as had been agreed from the beginning while offering her services in the future if Nala Se needs her again.

Fennec about of being saved from death.

Fennec and Koska threats Moff Gideon with their blasters.

Fennec alongside Boba Fett after their takeover of Jabba's Palace. 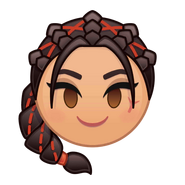