English
Ferdinand the Bull is an animated short based on the 1936 storybook The Story of Ferdinand by Munro Leaf. It was produced by Walt Disney Productions and released on November 25, 1938 by RKO Radio Pictures.

In the beginning, there are a lot of bulls, romping around together and butting their heads. There was only one bull who wasn't doing that, and that was Ferdinand. All he wanted to do was go under a shady tree and smell the flowers all day. Then one day his mother noticed that he wasn't playing with the other bulls. His mom asked him why he wasn't butting his head with the other bulls. He replied that all he wanted to do was to sit and smell the flowers. Luckily, his mother was very understanding. Over the years, Ferdinand grew and grew until he was as big as the tree. The other bulls wanted to accomplish one goal in life: to be in the bullfights in Madrid, Spain, but not Ferdinand. Then one day, five strange looking men were here to see the bulls. When the bulls noticed them, they fought as rough as possible, hoping that they would get picked, but not Ferdinand who went back to smell the flowers. Just as Ferdinand was sitting, he accidentally sat on a bumblebee. That made him go crazy and on a rampage, knocking the other bulls out and crashed into a tree, making it fall down. The five men cheered as they took Ferdinand to Madrid. There was a lot of excitement when the day of the bullfight came. On posters, they called him Ferdinand the Fierce. At the ring came out banderilleros, picadors, and finally, the matador who was being cheered on. When he was bowing, a woman in the audience gave him a bouquet of flowers which landed in his hand. Then the moment came where Ferdinand came out. He was wondering what was he doing there. The banderilleros and picadors were scared and hid, but the matador was scared stiff as Ferdinand noticed the bouquet. He was coming as the matador dropped it and ran away because he thought he was going to charge at him but Ferdinand just stopped and smelled it. The banderilleros and picadors were mad and the matador was so angry that Ferdinand wasn't charging at him. Then, he was so angry that he cried because he didn't do anything and broke his sword, tore off his red cape, literally pulled out his hair, and tore open his shirt. Ferdinand noticed that he had a flower tattoo with the word "Daisy" on his chest. Ferdinand licked it as he kept on crying. Eventually, Ferdinand was dragged out of the arena for smelling the flowers and was taken back home. Then, he went back under the tree and just smelled the flowers. 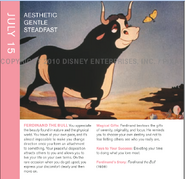 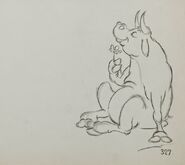 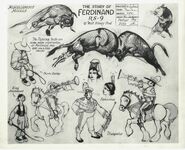 Designs of Ferdinand and other cows.