Disney's Festival of Fantasy Parade is performed daily in Walt Disney World's Magic Kingdom, debuting on March 9, 2014[1][2] as a part of bringing the stories of New Fantasyland throughout the park. The parade celebrates the festival from Disney's films.

The parade takes two floats and themes from Tokyo Disneyland's former daytime parade named Jubilation!, which ran until early 2013, at which point it was replaced by Happiness is Here Parade.

On February 10, 2014, Walt Disney World rolled out the red carpet to show off the latest elaborate costume creations for their upcoming Festival of Fantasy parade, debuting next month. With a backdrop of three of the new giant-sized floats, Disney sent parade performers walking the "catwalk" backstage behind the Magic Kingdom to unveil costumes inspired by films.[3]

On May 11, 2018, the Maleficent dragon float burst into flames as it was breathing fire while the parade passed through Liberty Square. The fire was soon put out and there were no injuries, but the float's head was completely destroyed.

The following day, the Gazebo float previously seen in various other parades (like the Rainy Day Cavalcade), featuring Aurora and Prince Phillip, replaced the Maleficent float. The Maleficent float returned to the parade on January 25, 2019, with some new colouring and non-flammable materials. 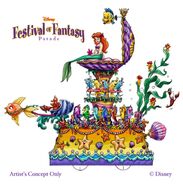