Stealing, getting annoyed by Dugan

Fethry Duck is the slightly mixed-up, extremely eccentric cousin of Donald Duck and a regular supporting character in the Donald Duck comic book series. Fethry often unwittingly annoys others via his peculiar vision on the world.

Fethry was originally created by the Disney studios, by Dick Kinney (writer) and Al Hubbard (artist) for a number of stories intended for the European market. Although this makes him an American invention, his first appearance was first printed in the Italian Topolino #453 in the story "The Health Nut", published on August 2, 1964.

His first appearance in the USA was not until 1966 in Walt Disney's Comics and Stories #304. Only in the early 2000s was Fethry genuinely accepted into the American comic books, whereas he has always been a fairly popular character in Europe (especially Italy) and Brazil.

Since his introduction, Fethry has been a recurring character in Uncle Scrooge and Donald Duck tales. In his earliest adventures, he supposedly lived in another state (possibly New York City or California), and visits via airplane. However, since 1964, he has been shown living in Duckburg on occasions. He is also closely associated with the hillbilly Hard Haid Moe and Donald's pet cat Tabby, who strongly dislikes Fethry and his antics (though Fethry is always completely oblivious to this).

In the Brazilian Disney comics, Fethry soon became one of the most popular members of the Donald Duck character cast, and he starred in various comics with him as the titular character. Some of these comics gave him a secret identity named "Morcego Vermelho" (The Red Bat), created by Carlos Edgar Herrero (artist) and possibly Ivan Saidenberg (writer). Fethry's stint as Morcego Vermelho ran in Almanaque Disney, Edição Extra, and a few other Disney comic book series from 1973 to 1990. The Red Bat stories remained a Brazilian phenomenon, but a few stories have made it to Europe, mostly Italy. The Brazilian comics also provide Fethry with a nephew, Dugan, and a girlfriend, Gloria.

Fethry made his first animated appearance in the reboot's season two episode "The Depths of Cousin Fethry!". He works as the caretaker for the McDuck Sublab, and knows a Friendly Krill named Mitzy.

He comes back in the season finale "Moonvasion!", helping in saving the Earth along with Mitzy, and appears at least once more in the series' finale episode "The Last Adventure!”, where he attends Webby Vanderquack‘s birthday party and accidentally slips up the news to Della that Donald is going on a worldwide vacation with Daisy. 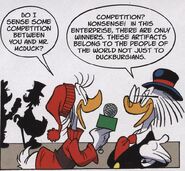 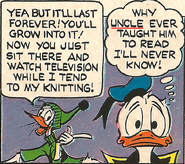 Fethry in "The Depths of Cousin Fethry!" 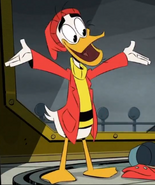