Unnamed quin-puplets (sons)
Pluto Junior (son)
Flapper "Fifi" is a character who appeared in some shorts. She is the love interest of Pluto, and some of her main episodes are Bone Trouble and Pluto's Quin-puplets. She is Minnie's pet along with Figaro. She is commonly found on Mickey Mouse & Friends merchandise in Japan.

She is very jealous in relation to Pluto, but also is very gentle, sweet and talented, which made her win the first prize in a contest for dogs in the episode The Dog Show. She has been Minnie's dog ever since Minnie was young.

In Mickey Mouse (TV series), Fifi is more aggressive and mischievous but is still friendly and playful towards those who gain her affection.

In You, Me and Fifi, Mickey ready for another date with Minnie, comes to her apartment, the two happily start kissing each other, when Fifi pops up between them. She tells him that Fifi doesn't love anyone but her loving faithful owner, but he tells her it's going to change, because he is a world favorite. She then wishes him good luck, and goes off to change. He tells Fifi it's time to be friends. Fifi growls at him, but he thinks it's just a smile.

But as he tries to kiss Fifi, which chomps his head. He luckily gets his head out of her mouth, then asks Fifi why she doesn't love him. He shows her a picture of Minnie, but this makes her even angrier. Fifi smashes him, grabs his shoe, violently throws him across the room, knocks over her pictures, and violently smashes him against the floor. Minnie comes downstairs to let him know she's almost ready and finds it adorable to see a "happy" Fifi laying on top of a beaten and petrified Mickey. She says she'll be ready in a jiffy and runs back upstairs. Fifi, which is now angry, starts chasing Mickey, which causes him to close the door to the kitchen. Mickey later comes back from the store with a few bones, chew toys, a hybrid SUV, and a pillow made from his grandma's wedding dress, but finds that Fifi has vanished.

He feels a drip, which turns out to be Fifi hanging from the ceiling fan. Fifi attacks him, hits him with her chew toys, and throws them out of the window. He tries to stand up for himself, telling Fifi to get out of her naughty behavior. They both see the pillow, and they both begin fighting over the pillow. The pillow then gets ripped in half, and Fifi falls out of the window, and is now hanging on a flagpole. Mickey panics and jumps over the window to save her. Fifi can't hold on any longer, as her teeth lose their grip and Fifi starts to fall. But Mickey grabs Fifi's left front paw, telling her he will never let her go.

Minnie, now ready for the date and goes downstairs to tell him she is ready. But she finds it adorable to see Fifi licking her loving boyfriend. She embraces him and the two happily start kissing each other again, until Fifi pops between them again. He tells her she'd loved Mickey and Fifi would be friends. She agrees. But Fifi growls at her, and Minnie thinks it's a smile. But as she tries to kiss Fifi, the violence starts all over again as Fifi starts knocking over some of Minnie's things.

In It Takes Two to Tangle, Fifi argues with Pluto over the last meatball while, Chip and Dale past by happily, which Fifi and Pluto stop to admire. The next day, Fifi and Pluto are still arguing while, Chip and Dale, now knitted together, past by. Chip happily goes about the day while dragging a very reluctant Dale around, which Fifi and Pluto stop and watch. They next day, Fifi and Pluto still arguing, watch as Chip cries while running away (or at least tries to) dragging Dale. Fifi and the other animals notice this and all try to get the two of them to make up. Inspired, Fifi, Pluto, and the other animals have themselves knitted together. Later, Fifi eats the last meatball as Pluto watches begin to regret their decision.

The only shot where both Fifi and Dinah the Dachshund appeared together.

With Pluto in a VHS.

With Pluto in a magazine 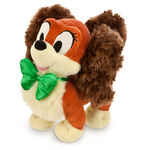