"Respect the classics, man! It's Hendrix!"
"Fly away, Stanley, be free!"
Fillmore is a character in Disney/Pixar's 2006 film Cars and its sequel. He was voiced by George Carlin in the first film (before his death in 2008) and by Lloyd Sherr in the sequel.

In the first film, Fillmore is a 1960 Volkswagen bus with psychedelic symbols and liberal/environmental bumper stickers on his body. (he's a hippie) Fillmore is a strong advocate of natural products and makes his living by selling organic fuel behind his neon dome, painted similarly to himself. His lawn is allowed to grow free with no mowing or pruning, and he also creates his own lawn ornaments from scrap. He believes that organic, renewable fuel would be more widespread were it not for a conspiracy involving the major oil companies controlling the government and supposedly not wanting to compete with Fillmore's cheap and plentiful fuel. Fillmore is a fan of Jimi Hendrix, and plays his version of the Star Spangled Banner every morning, much to the frustration of his neighbor Sarge. Despite their differences and frequent arguing, they appear to be close friends.

"Fillmore is Radiator Springs' resident hippie. A believer in individuality and all things natural, he brews his own organic fuel and preaches its many benefits. Visitors can try Fillmore's special flavors in the tasting room behind his love-bead and tie-dye-covered geodesic dome. His many conspiracy theories and "naturally" unkempt yard drive his neighbor Sarge absolutely crazy."[1]

Radiator Springs’ resident hippie Fillmore is an easy-going, peace-loving 1960s Volkswagen van. And as his friend and neighbor Sarge likes to say, “once a hippie, always a hippie.” At his popular shop Fillmore's Taste-In, Fillmore brews his own fuel, which he sells with Bohemian accessories like tie-dyed mud flaps. But when he learns that the World Grand Prix will be run exclusively on the alternative fuel Allinol, Fillmore closes up shop and signs on as the fuel expert for Team Lightning McQueen.

Lloyd Sherr is the voice actor for Fillmore in the sequel, replacing the deceased George Carlin. 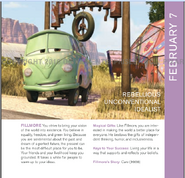 Retrieved from "https://disney.fandom.com/wiki/Fillmore_(Cars)?oldid=1533838"
Community content is available under CC-BY-SA unless otherwise noted.