E
Finding Nemo: Escape to the Big Blue is a video game released by Altron exclusively for Nintendo DS and Nintendo 3DS platforms. The game is based on the Finding Nemo series by Disney and Pixar. Like in Finding Nemo: The Continuing Adventures, the game takes place during the part where the end of the first film left off.

The game was re-released on September 11, 2012 on Nintendo DS and 3DS as a Special Edition to promote the 3D re-release of Finding Nemo. Unlike in the original version which uses silent cutscenes, it uses clips from the movies during Story Mode (using archived voices of characters) when playing each mini-game from each member of the Tank Gang.

Like in Finding Nemo: The Continuing Adventures, the game takes place where the Tank Gang escapes from the dentist's office to find new homes in the ocean.

The game almost utilizes the same gameplay like in Finding Nemo: The Continuing Adventures, usually when the players start with each member of the Tank Gang by helping them escape Philip Sherman's office. To help each member escape, the player must navigate his/her way across the street to reach towards the ocean. The player must avoid certain types of obstacles such as cars, crabs, and seagulls while navigating each Tank Gang member to the ocean.

The player can earn also tokens (shells in the Special Edition version) for currencies in Interactive Reef mode (a feature not in The Continuing Adventures) where he gets to customize his or her ocean or aquarium to make it into a beautiful marine environment by adding decorations, characters, backgrounds, etc.

Just like what happened in the previous game, the player will unlock a number of mini-games whenever he/she completes each Tank Gang member's escape plan. To unlock a new mini-game, he/she must complete the one in Story Mode first. 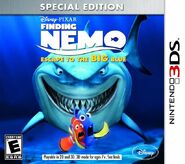