Finding Nemo: The Continuing Adventures is a video game released in 2004 by Altron exclusively for Game Boy Advance. The game is based on the Finding Nemo series by Disney and Pixar, picking up where the first film left off.

The Tank Gang escapes from the dentist's office to find new homes in the ocean.

The players start with each member of the Tank Gang by helping them escape Philip Sherman's office. To help each member escape, the player must navigate his/her way across the street to reach towards the ocean. The player must avoid certain types of obstacles such as cars, crabs, and seagulls while navigating each Tank Gang member to the ocean.

Once the player completes this mini-game, he/she will unlock Gill's story. 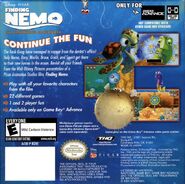