Finding Nemo Submarine Voyage is an attraction in Tomorrowland at Disneyland that opened on June 11, 2007. It uses the submarine vehicles, track layout, and location used by the Submarine Voyage, which closed in 1998. It is themed to the 2003 Disney/Pixar animated film, Finding Nemo.

It is the much-larger sister attraction of The Seas with Nemo & Friends, an Omnimover ride at The Seas Pavilion in Future World (now renamed World Nature) at Walt Disney World's Epcot.

For more information on the original attraction, see Submarine Voyage.

The Submarine Voyage, as it was originally called, opened on June 6, 1959. It featured eight "submarines" (actually submarine-shaped boats with the guest seating area below the waterline), which sailed through Submarine Lagoon, past animatronic sea life, and simulated a trip under the polar ice cap. The attraction closed on September 9, 1998, after more than 39 years of operation.

After the attraction's closing, then-Disneyland president Paul Pressler promised a new attraction to replace the Submarine Voyage by 2003 and was long rumored to be based on Disney's 2001 animated film, Atlantis: The Lost Empire, but 2003 came and went with no new attraction, a year after Paul Pressler stepped down to become president of The Gap.

Finally, on July 15, 2005, two days before the 50th anniversary of Disneyland, Walt Disney Parks and Resorts president Jay Rasulo officially announced the Finding Nemo Submarine Voyage at the newly-opened Turtle Talk with Crush attraction (which is also based on Finding Nemo) at Disney's California Adventure.

The current attraction uses the same subs and tracks layout as the original Submarine Voyage. Other than the addition of the projection screens, the only noticeable modification to the attraction was moving the entrance waterfall up quite a distance, reducing the amount of time the subs spend outside and necessitating lengthy closures of the monorail to allow construction of the show building extension to take place.

Throughout the first half of 2014, the attraction underwent its first "dry rehab" (a refurbishment involving draining the entire lagoon). At the time, there was speculation and fear that the "refurb" was not actually such and that the ride, like its shuttered Floridian counterpart, had been quietly and permanently closed. Disney put various messages on the work walls promising a September return, and Bob Iger dispelled rumors of a permanent closure at a shareholders meeting, stating the attraction was "too unique" to be nixed.

On April 30, 2021, Disneyland Resort reopened after being temporarily closed due to the COVID-19 pandemic; however, this attraction remained closed due to its tight quarters being conducive to social distancing. Rumors have circulated that park management is planning to use the pandemic as an excuse to permanently close the attraction and, along with Autopia and Star Wars Launch Bay (plus shortening the route of the monorail), bulldoze it for a future Tomorrowland overhaul and Fantasyland expansion; allegedly, management has been trying to find a way to get rid of the labor-intensive attraction since the first dry rehab in 2014. On July 12, 2021, however, Disney once again assured the public that the subs would be staying via construction walls around the lagoon. During this refurbishment new coral was added to the lagoon and a figure of Hank the Septopus was placed on a rock above the surface within eyesight of the seagull trio.

The Finding Nemo Submarine Voyage is hosted by an Australian group known as the Institute for Nautical Exploration and Marine Observation (NEMO). For handicapped guests that cannot transfer into the Submarines, a "Marine Observation Outpost" offers an enhanced video ride-thru of the attraction. On a nearby buoy, a trio of Seagulls sits, constantly shouting "MINE" at the passing subs. On this voyage with NEMO, we are seeking out an active underwater volcano and begin our voyage through the lagoon passing through recently emerged ruins of a lost civilization (resembling the Tiki decorations in the dentist's tank) and briefly coming across divers P. Sherman and his niece Darla, who has bagged and caught a new fishy friend, as we travel further into the coral reef. As we pass giant clams and sea bass, a surface storm begins, prompting the captain to dive further.

At this point, the submarine travels through a waterfall and enters the hidden ride building, where guests find themselves apparently moving through underwater caverns. The captain announces that, due to advancements in marine technology, they can use "sonar hydrophones" (an homage to the original attraction), to hear the fish talk. The sub passes through a dark cavern where huge eels lunge toward the submarine, and lobsters can be seen as well. The sub passes Marlin and Dory as they discover that Nemo has gotten lost again. Farther along the reef, guests encounter Mr. Ray and his class swimming through the coral looking for Nemo as well. The first mate announces that the sub is approaching the East Australian Current, and the submarine enters the current along with Nemo, Squirt, Crush, and other sea turtles.

The sub then exits the current and enters a graveyard of sunken ships, Jacques can be seen nearby while Marlin and Dory continue their search for Nemo. Bruce and Chum swim inside a sunken submarine surrounded by World War II mines. The submarine "hits" a mine, causing the mine to explode, resulting in the sub shaking and temporarily losing power. As the sub goes dark, Marlin and Dory are surrounded by small glowing lights, which turn out to be phosphorescent lights on several huge deep-sea anglerfish. After Marlin and Dory escape the creatures, they make their way through a forest of jellyfish.

The submarine reaches the active deep-sea volcano. Gill, Bloat, Gurgle, Bubbles, and Squirt chant as lava flows down the volcano's sides, while Marlin and Dory finally reunite with Nemo. The volcano erupts just as the sub escapes and returns to the reef. The fish gather around and celebrate finding Nemo once again. Suddenly, a pod of humpback whales appears, and one of them swallows both Dory and the submarine. Dory swims about trying to understand the whale's vocalizations. After a few moments, the whale shoots the submarine and Dory out through its blowhole. Dory then mistakes the sub for a "big yellow whale" and speaks whale; saying goodbye.

The captain tells the first mate not to enter anything that has happened in the ship's log because "nobody would believe it anyway." He then says, "We'd better take her up before we have a run-in with a sea serpent or an encounter with a mermaid" (references to the original attraction, which included mermaids and a sea serpent). Two rock formations can be seen, one shaped like a sea serpent's head, and the other shaped like a mermaid. The sub then surfaces and reenters the harbor, where a pair of king crabs snap at air bubbles coming from a sewage pipe. An instrumental version of "Beyond the Sea" plays as the submarine docks and the captain thanks the passengers for riding.

Trio of seagulls on a buoy 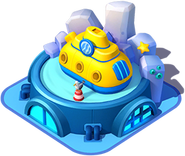