To preserve the magic in the Disney Parks

Disney, Amanda, Being a DHI

"Hello, there, park visitor! My name is Finn"
Lawrence Finnegan "Finn" Whitman is a 18-year-old from Orlando; main character of the Kingdom Keepers book series by Ridley Pearson. He is one of the five kids that modeled as DHIs (Disney Host Interactive or Daylight Hologram Imaging) to become holographic guides to the Disney Parks. He acts as the group leader of

the Keepers. Their goal is to stop the Overtakers from controlling the parks.

Finn is the head of the Kingdom Keepers DHI team. He took the DHI job at his mother’s urging — little did she know what path that would lead him down. Finn is probably the smartest of the Kingdom Keepers. With his quick wit, courage and grace under pressure he comes up with some pretty creative responses to danger. This is a guy that others depend on. His reliability and diplomacy in managing a wide array of personalities makes him the natural-born leader of the Kingdom Keepers along with his best friend and new keeper Connor Taylor.

In the first book, Disney After Dark, he and the other keepers save the parks from Maleficent. In Disney at Dawn, he and the keepers are contacted by Wayne after Maleficent escapes. Then he and the others must save Jez, who has been kidnapped by the Overtakers, and to destroy a second DHI server that causes the kids to go into coma when asleep. On Disney In Shadow, He leads the group to rescue Wayne, who has been kidnapped. In the end, Maleficent and the Overtaker boss, Chernabog are captured, basically leaving the Overtakers without a clue what to do.

In Power Play, Finn and the others encounter the replacement leaders for the Overtakers, The Evil Queen, and Cruella, who have recruited other kids into the Overtaker ranks in their plan to free Maleficent and Chernabog. Finn is put under a spell by the Queen to kiss Jess and put her into Sleeping Beauty Syndrome to ensure her visions of the future cannot help the Keepers. However, the Queen's plan fails as Finn's love for Amanda makes him kiss her instead. Freeing Amanda from the curse, Finn and the other are unable to stop the Overtakers from freeing their bosses.

In Shell Game, things have come to a head in the battle to defeat the Overtakers as they attack the Base, which houses the DHI servers. Also, rumors have been spreading that the Keepers might get replaced because Disney might want new interactive holograms. He is given the code "Starfish wise, starfish cries" to call upon King Triton's forces if ever in peril; he's use this twice, one to nearly drown Maleficent. His relationship with Amanda also becomes strained, but his love for her remains unwavering.

Finn on Disney After Dark 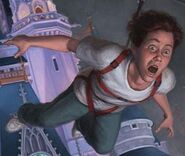 Finn on Disney At Dawn 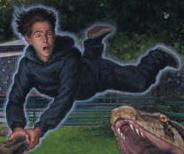 Finn on Disney In Shadow 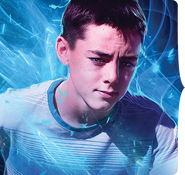 Retrieved from "https://disney.fandom.com/wiki/Finn_Whitman?oldid=3559313"
Community content is available under CC-BY-SA unless otherwise noted.