April 25, 2014
"Fire Escape" is the twentieth episode of Mickey Mouse.

Mickey attempts to rescue Minnie from her burning apartment building.

Mickey arrives at Minnie’s apartment building, setting the complex in a frenzy while attempting to evacuate all its tenants. He heroically goes onto save the entire building - including the many babies of the apartment. However, the fire escape broke and now he can’t reach Minnie. Mickey then galvanizes all the saved tenants to construct a “human” pyramid to lift the heroic mouse to his girl’s top-story window.

Once in Minnie’s apartment, Mickey makes a startling discovery: Minnie’s place isn’t on fire at all, she’s merely overcooked and badly burnt the turkey she was making for her dinner with Mickey. To make matters worse, Goofy barges through the front door with two firefighters in tow who immediately unleash their hoses on the mice. 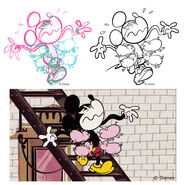