Fire Mountain was an unbuilt roller coaster attraction designed for the Magic Kingdom's Adventureland, which would have been based on the 2001 Disney animated film Atlantis: The Lost Empire.

In the mid-90s, after the closure of 20,000 Leagues Under the Sea: Submarine Voyage, there were two major proposals for E-Ticket attractions that could take the attraction's place. One was a volcano attraction inspired by the film's Vulcania location, the other was the Disney Villain inspired Bald Mountain flume ride. The concept would be relocated to Adventureland when management enjoyed both attraction ideas, but wanted to prioritize the villain concept for Fantasyland. It was eventually decided by around 1999 to theme the attraction to the then-upcoming Atlantis film.

The attraction would have been accessed by a new canyon path in-between Pirates of the Caribbean and a re-routed Jungle Cruise that would lead to a Whitmore Enterprises base camp at the edge of the Walt Disney World Railroad path, with the mountain itself being built outside the berm. Set in 1916, two years after the film, the story of the attraction would focus on Preston Whitmore seeking to make Atlantis's existence public and offer expeditions to visitors in newly developed vehicles. However, due to mishaps, the vehicles would be forced to make a detour through the lava-filled caverns of the volcano. The attraction would use a unique hybrid ride system. While the attraction would start as a standard coaster, the trains would hook up to a suspended track midway through to fly through the caverns.

The project, alongside Bald Mountain, would eventually be cancelled as a result of the underperformance of the film, the downturn in tourism after the 9/11 terror attacks, and Michael Eisner visiting the then-recently opened Universal Islands of Adventure (which he intended for Fire Mountain to compete with) and seeing it was such a mess that it posed no threat to Walt Disney World.

Layout of the attraction complex 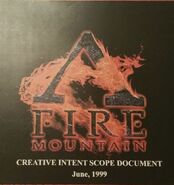