The Avengers: Earth's Mightiest Heroes
Hulk and the Agents of S.M.A.S.H.

Orange body and flames like hair coming out of his head.

Cosmic-powered Fire Staff
Firelord is one of Galactus' heralds and manifests its Cosmic Power via control of Fire.

Firelord oversaw the construction of a device at a volcano that would help Galactus consume the Earth . He ended up fighting a group of heroes made up of Black Panther, Invisible Woman, Winter Soldier, Ant-Man, and Hulk . Firelord was weakened when Invisible Woman cut off his oxygen with her forcefield and was then put out by Hulk's thunderclap and his tower was destroyed by Winter Soldier with a bazooka.

Firelord was Galactus' latest herald. He attacked the Agents of S.M.A.S.H. until he was knocked out. During that fight, Firelord mentioned that Terrax had failed Galactus and it is implied that Firelord used his fires on him. When Galactus plans to consume Ego the Living Planet, A-Bomb carried Firelord's body onto Galactus' ship. When Leader took over the weaponry, Firelord helps the Agents of S.M.A.S.H. take down Leader. After Hulk and Ego the Living Planet defeat Galactus, Firelord leads Galactus away where Hulk has them look for an uninhabited planet for Galactus to consume. 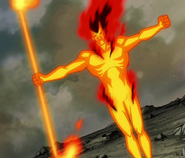 Firelord seen in The Avengers: Earth's Mightiest Heroes
Add a photo to this gallery
Retrieved from "https://disney.fandom.com/wiki/Firelord?oldid=4038501"
Community content is available under CC-BY-SA unless otherwise noted.