The First Order AT-ST had its design based on the old AT-ST of the Galactic Empire, but it has improved gyroscopic systems, making the walker more stable. This vehicle is also covered by a strong next generation armor that is lighter than the one of the Imperial AT-ST. Another difference is that the cockpit of the First Order AT-ST has a single long viewport for both crewmembers in its front instead of two separated viewports as the old AT-ST.

After Vice Admiral Amilyn Holdo sacrificed herself to destroy the Mega-class Star Dreadnought Supremacy, Finn and Rose Tico who were infiltrated aboard the ship, are surrounded by destruction as the ship was split in two. Captain Phasma and a group of stormtroopers appear and attempt to attack them. However, all of them are surprised when one of the First Order's AT-STs that were in the hangar of the ship, starts to fire on Phasma and the troopers. As the troopers fire and manage to destroy the cover of the walker's cockpit, it is revealed that BB-8 inside the vehicle. The droid had hijacked the walker and was using it to help Finn and Rose, making them both look at him with astonishment. Then, after Finn fought and defeated Phasma, he and Rose the get on the First Order AT-ST that BB-8 is controlling and the walker carries them to a First Order shuttle, so they can escape the Supremacy. 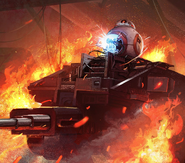