“Always wanted to fly one of these things.”
―Poe Dameron to Finn[src]

An elite military unity, the Special Force TIEs took on the most challenging and hazardous missions to achieve the First Order's goals, and specialized in long-range reconnaissance and demolition operations. To accomplish such missions, the unit flew the two seater Special Forces TIE fighter, which Siena-Jeamus Fleet Systems equipped with Class two miniaturized hyperdrive, and a more powerful weapons package than the standard First Order TIE fighter. TIE pilots wore flight suits equiped with life-support systems, but because missions would require hours of travel through hyperspace, the TIE/sf's pressurized cockpit allowed pilots to remove their helmets while operating the craft.

The primary weapons of the TIE/sf were the front-facing SJFS L-s0.6 laser cannons, a SJFS Lb-14 dual heavy laser turret, and a Kuat Drive Yards Arekyd missile launcher that could fire ST7 concussion missiles and mag-pulse warheads. The laser turret could rotate 360 degrees but at limited angles, as safety systems prevented the cannon from firing at the craft's own wings. One pilot alone could operate the entire fighter and all its weapons from the cockpit's forward-facing seat, but the TIE/sf was most effective with a gunner in the rear-facing seat, controlling the laser turrent and missile launcher. A targeting display presented data for the gunner, and a wide transparisteel viewpoint offered views directly through the cockpit's aft hull.

Although the TIE/sf and TIE/fo shared the same overhall dimensions and were similar in appearance, the resemblance was largley superficial, and the respective crafts featured numerous unique and non-interchangable components. Unlike the TIE/fo, which housed a single ion reactor aft of the pilot's seat, the TIE/sf derived power from twin reactors set on either side of the command pod. Because they had additional armament, shield generators, and power-cell banks creating more heat than a standard TIE could dissipate, designers incorporated an experimental ion-flux cooling system to prevent overheating. The combined weight of the TIE/sf's exclusive features made the craft substantially heavier than TIE/fo. Red flashes on the cockpit's port-side visually disdinguished them from standard TIE/fos.

Concept art of the TIE/sf Fighter that Finn and Poe Dameron stole crashed on Jakku. 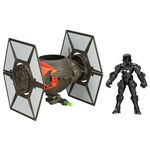