Footsoldiers of the First Order

Stormtroopers of the First Order are much more formidable than their Imperial counterparts in the Galactic Empire, and are more skilled, more versatile, better equipped and much more accurate in shooting. They are also indoctrinated and trained since birth to support the First Order's cause and beliefs, willingly serving the First Order with fervor and zeal.

The First Order Stormtroopers are loyal and obedient, and they follow orders without question from high-ranking officials such as Captain Phasma and Armitage Hux, and Snoke's apprentice, Kylo Ren.

The First Order Stormtroopers are also very merciless in battle; killing their enemies or innocent civilians without any hesitation, guilt, or remorse. Despite this, most of them, like Finn, have a sense of justice, honor, good morals and principles.

Unlike their predecessors, the First Order Stormtroopers are skillful soldiers, being very good at aiming and shooting for their targets, and have been trained in hand-to-hand and melee combat.

The stormtroopers appear in Star Wars: The Force Awakens. They are now part of the First Order, a faction formed from a splinter group of the Galactic Empire, run by Supreme Leader Snoke. They are led by General Hux and Captain Phasma, coming in a variety of variants, such as snowtroopers, flametroopers, riot control, and megablaster stormtroopers. Unlike their Imperial predecessors, First Order stormtroopers are more intelligent, stronger, and more adaptable; they are capable of melee combat and are armed with stronger armor capable of apparently withstanding an attack by a Wookiee and better, more advanced weaponry. They also have a better aim. They are first seen tearing apart a village on Jakku in search of the map to Luke Skywalker's location, in which they slaughter the inhabitants on Kylo's orders. They proceed to engage their enemies on several fronts during the course of the film, including the Battle of Takodana.

One notable stormtrooper in the film is FN-2187, better known as Finn, who deserts the First Order upon seeing both the death of one of his squad mates and seeing the First Order slaughter innocent bystanders on Jakku. He then proceeds to help prisoner and Resistance pilot Poe Dameron escape from the First Order and crashes on Jakku. Proceeding with Poe's mission to return Poe's droid BB-8 and the map he carries to Luke's location to the Resistance, Finn encounters and befriends the scavenger, Rey, and the heroes Han Solo and Chewbacca along the way. Finn later helps the Resistance when Rey is kidnapped by Kylo by providing valuable intel on Starkiller Base, allowing the Resistance to destroy it. Finn also duels Kylo during the destruction of Starkiller Base with Anakin Skywalker's lightsaber, and though defeated, right after the Force-sensitive Rey takes up the weapon and defeats the dark sider.

The stormtroopers appear in Star Wars: The Last Jedi, where Captain Phasma orders the captured Finn and Rose Tico to be executed after they sold out to the First Order by DJ. Before they were beheaded by two stormtroopers, Vice Admiral Amilyn Holdo destroyed the Supremacy by jumping the Resistance cruiser to lightspeed at the First Order fleet. Thanks to Holdo's sacrifice, Finn and Rose escaped custody and fought the stormtroopers with BB-8's help, resulting in Captain Phasma's death.

Stormtroopers appear in Star Wars: The Rise of Skywalker.

In December 17, 2015, the First Order Stormtroopers had began meet-and-greet sessions in Tomorrowland at Hong Kong Disneyland, the second meet-and-greet characters as part of its 10th anniversary celebration since Lotso in one month ago, and in conjunction with the release of Star Wars: The Force Awakens.[1] They interact with guests as they explore Tomorrowland.

"Do you have a permit for that pop-up?"

The Stormtroopers in Ralph Breaks the Internet 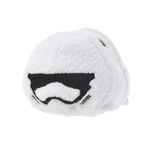 A LEGO Minifigure of a First Order Stormtrooper 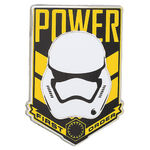 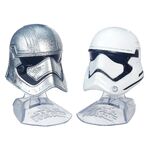 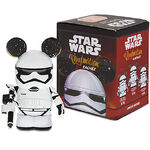 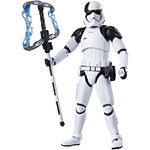 Retrieved from "https://disney.fandom.com/wiki/First_Order_Stormtroopers?oldid=4318675"
Community content is available under CC-BY-SA unless otherwise noted.