September 3, 2010 (preview)
September 24, 2010 (premiere) – April 4, 2014
Fish Hooks was an American animated television series created by Noah Z. Jones. Twenty-one episodes were ordered for the first season. It premiered on September 24, 2010, after the Phineas and Ferb episode "Wizard of Odd". An 11-minute preview was shown on September 3, 2010, following the Disney Channel Original Movie, Camp Rock 2: The Final Jam. It also premiered on ABC Family on January 15, 2011, at 7/6c. The stars of Fish Hooks are former That's So Raven and Cory in the House star Kyle Massey, StarStruck and Jonas L.A.'s Chelsea Kane, and Justin Roiland. Fish Hooks was cancelled in 2013 and would not be renewed for a fourth season. The final episode aired April 4, 2014.[citation needed]

The series revolves around adolescent fish Milo, his shy brother Oscar, and their "overly dramatic" friend Bea Goldfishberg. They attend a school submerged in an aquarium in a pet store. The series chronicles their daily lives as they with everything from eel attacks and field trips to romance and homework. In the credits sequence of each episode, there is a 30-second short featuring a rattlesnake and a mouse having various conversations and banter (usually about the episode itself).

In 2009, President of entertainment Gary Marsh said of the show, "The Fish Hooks team has created one of the most original, inventive animated series on television – bringing an ingenious twist to the classic archetypes of high school life." The series will be produced using a mix of 2D digital animation and photo collages. The series is created and co-executive produced by children's book illustrator Noah Z. Jones and developed for television by Alex Hirsch and Bill Reiss. Main and recurring cast were announced in a Disney Channel press release on August 26, 2010.

Fish Hooks has had at least one guest star in almost every episode of season 1. Notable Guest stars include: 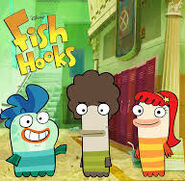 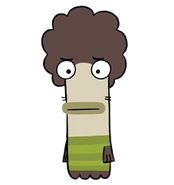 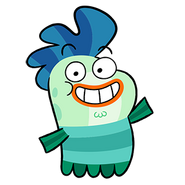