Not to be confused by Fish Out of Water (song).

Fish Out of Water

Anyone tapping the glass of his scuba helmet
Fish Out of Water is a major character in Disney's 2005 animated feature film Chicken Little.

Fish, as his name suggests, is a goldfish who wears a scuba helmet filled with water and lives on the surface.

Unable to speak properly, he instead makes gurgling sounds and acts out what he is feeling. He isn't very shy around others, and will perform brave stunts without fear.

Despite his inability to speak properly, Fish communicates through gurgling to express himself of how he is feeling such as using his expressions and the gestures he does to the other characters.

Fish is first seen in Mr. Woolensworth's class where he claims that he is present during classtime. He is next seen during the gym where he, Abby, and Runt try to protect Little from Goosey Loosey in which the trio retreats from her. When Chicken Little gets signed up for the school baseball team, he, Runt, and Abby train him to become better in playing baseball. He is later seen posing as a super fan when Chicken Little is ready to play again during the game; after Chicken Little wins the game and is revealed to be safe during the game, Fish is seen cheering for his victory.

Later after a hexagonal object hits Little after being satisfied of his victory, Fish, Abby, and Little discover what was going on in Oakey Oaks where Fish interacts with the hexagonal object in which they plan to rescue him. Little, Runt, and Abby end up inside the UFO where they plan to rescue Fish to know when he is safe in high he is worried that the aliens are planning to take over Earth where he, Runt, Abby, and Little plan to escape in which they manage to do so.

Later when the aliens restore Oakey Oaks back to normal, Fish, Abby, and Little are surprised when Foxy who ends up becoming kinder. During the end of the film, Fish and the citizens are watching a movie about Chicken Little where they seen a future version of Fish talking to a future version of Chicken Little about an alien invasion in the planet's atmosphere. When the move ends, he and the other citizens like the movie they saw, making Chicken Little popular again. Fish is later seen during the credits singing the closing song Don't Go Breaking My Heart though only vocalizing the lyrics. 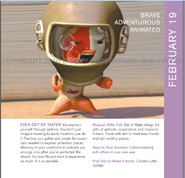 Retrieved from "https://disney.fandom.com/wiki/Fish_Out_of_Water_(Chicken_Little)?oldid=4524623"
Community content is available under CC-BY-SA unless otherwise noted.