They perform on a platform in the theater's main stage.

The members of the band include:

Oscar, Zeb's son, sits quietly on the right-hand side of the band's platform, clutching and squeezing his teddy bear.

Zeb, Ted, Fred, and Tennessee also appear in the 2002 feature film based on the attraction, where the band is simply called the Country Bears. Zeke is used as the name of the band's tour bus, with the film's DVD commentary explaining he had passed away early on in their musical career and the bus name was a memorial to him.

The Five Bear Rugs began playing music together when they were in first grade. Fifteen years later they were still playing—in fourth grade! Zeke plays the banjo and wears glasses—he’s the only one who can read music. Fred plays the mouth harp and carries the tune (his wife says Fred is lazy, and a tune is the only thing he carries). Ted blows the white lightning jug, and Tennessee plays the one-stringed thing (he hopes one day to add more strings). Zeb plays fiddle, and Zeb’s son Oscar accompanies his father on concert tours because Zeb’s wife works (she models fur coats—always the same one—at a nearby boutique).

The Country Bears, the film's equivalent to the Five Bear Rugs, were originally construction workers that sang together during lunch breaks. Their foreman Henry noticed their talent and the band was established in 1974 to massive success, spawning hit albums, a cartoon, and, anachronistically, the Disney theme park attraction itself.

During the span of their career together, the band produced five albums.

After the massive failure of their attempt at entering the hip-hop scene with "Straight Outta Pendleton" and years of clashing egos, the band broke up and went their separate ways in 1991. About a decade later, young fan Beary Barrington would rally them back together for a benefit concert to save Country Bear Hall.

When the verse was changed to:

He was renamed Tennessee so it would rhyme with "G".

Concept art of the band. 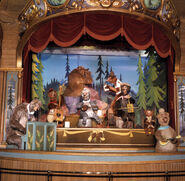 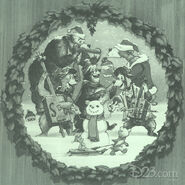 Cameo in The Tigger Movie.
Community content is available under CC-BY-SA unless otherwise noted.
Advertisement