2
Michael Peter Balzary, better known as Flea, is an Australian-born American musician and actor. In 1983, he joined the Red Hot Chili Peppers alongside fellow co-founder Anthony Kiedis. The two of them are the only constant members throughout the years and their group is regarded as one of the most influential bands.

Flea has also acted in numerous productions. His recognizable roles include Needles in Back to the Future Part II and III, Donnie in The Wild Thornberries, a Nihilist in The Big Lebowski, and Eddie in Baby Driver.

For Disney, he voiced Mind Worker Cop Jake in Inside Out, Jordan's Fear in Riley's First Date?, The Milk Bandit in Sheriff Callie's Wild West, and Duke Caboom TV Announcer in Toy Story 4. He also played Vect Nokru in Obi-Wan Kenobi. Additionally, he has appeared as himself in The Ben Stiller Show, The Simpsons, and Family Guy and an Orderly in American Dad! for Fox.

Mind Worker Cop Jake
(Inside Out) 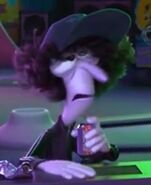