Start a Wiki
Fletcher Rocky Quimby is a character from A.N.T. Farm.

He is an artistic genius, gifted in all media including painting, sculpture, and drawing. He met Chyna on her first day at Webster High School and soon became her friend. However, he deeply developed romantic feelings for her despite their friendship. Fletcher has trouble keeping his crush a secret when he constantly keeps adding her in his art.

He is played by Jake Short.

In TransplANTed, Chyna believes that Fletcher is carrying a dead body, which is actually a beeswax sculpture. Olive mocks him by saying he has to literally "make friends." Fletcher then explains that he's an artist and he's sculpting the entire class out of beeswax as a project. Chyna comments that they're beautiful, and Fletcher accidentally tells Chyna that she's beautiful, creeping her out. He then corrects himself saying her music's beautiful, even though he hasn't heard her play. So to escape an embarrassing moment, he pretends he's a statue. Later, when first period ends and Angus get caught in the flood of teens, Fletcher says they should go back for him, so Olive slaps him straight. In music class, some big kids stuff his head into a tuba, so Chyna blows into it to shoot him out. At Chyna's house, Fletcher comes dressed in a business man getup, with a top hat and spectacle to match as an attempt to look older. When Chyna's dad comes home early, Fletcher creates wax figures of the three of them so they can sneak out and go to Lexi's party, but not before he practices hitting on Chyna's double. At the party, he pretends that he's a magician to impress Paisley, and later crashes into the stereo, almost ruining the party before Chyna performs. The next day, when Chyna says they need more wax figures, Fletcher says they're already done, creeping Chyna out again, so he corrects himself saying they will be done and then acts like a statue again.

In ParticipANTs, Fletcher comes to the Activity Fair dressed in a suit of armor so that none of the big kids can hurt him, but then gets caught by a giant magnet. Trying to get into the chess club, he ends up getting pieces shoved up his nose, so he goes to the End Hunger Today Club. He notices that it's only Cameron and he's eating buffalo wings, so after hearing of the club's true purpose, (using school funds to buy buffalo wings) he wants in. He gets in by threatening Cameron he will tell Skidmore about his little scam, which allows him to be in. When they order some more buffalo wings he gets some super hot ones, causing him to want them out ASAP! When Principal Skidmore shows up at the same time as the delivery guy, Fletcher blows their cover saying, "Our wings are here!" This causes Principal Skidmore to want in.

In The PhANTom Locker, Principal Skidmore convinces Fletcher to draw her a self-portrait of her in a schoolgirl outfit, much to his displeasure. Taking Chyna's advice, he paints her exactly how she is on the inside but Skidmore isn't happy about it.

In SciANTs Fair, Fletcher is seen working on his science fair project. However, Chyna and Olive end up destroying it.

In StudANT Council, Fletcher tries to get closer to Chyna by making friends with her dad, Darryl. He also enlisted in the help of Angus.

In Bad RomANTs, Fletcher makes a sculpture of Chyna's head out of chewed up bubblegum. For the entire episode, he is seen doing nice things for her such as pulling out her chair and trying to feed her chocolate covered strawberries.

In The InformANT, Fletcher helps Chyna get her Free-Village bag by diving into the trash can to get pudding cups. He also helps teach Chyna's dad a lesson.

In ReplicANT, Fletcher gets jealous of Nigel and tries to ruin his date with Chyna.

In ClairvoyANT, Fletcher takes a stand against Principal Skidmore for removing the dinosaur shaped chicken nuggets in the cafeteria. He even dresses up as a dinosaur and gets featured in Cameron's video for Space Cadet.

In ManagemANT, Fletcher teams up with Paisley against Olive and Angus in a home economics challenge. He and Paisley end up losing.

In PhilANThropy, Fletcher helps to save Gibson's job by participating in the Save Gibson web-a-thon.

In FraudulANT, he gives his favorite artist Zanko one of his paintings and later, Chyna, Olive, Angus, Wacky, and himself try to get his painting back after Zanko took the credit for making it.

In IgnorANTs Is Bliss, he helps Chyna get Olive's memory back.

In Slumber Party ANTics, he draws a comic book for Cameron after declining once but only to hang with Chyna.

In America Needs TalANT, he, Cameron, and Darryl wait in line at a popular food truck.

In sANTa's Little Helpers, he teams up with Chyna and Olive to try and get the falty toys back from the orphanage when they find out Ms. Skidmore really gave the phony ones to them.

In You're the One That I wANT, he helps Lexi try to sabotage the school musical starring Chyna because he is jealous of the handsome leading man, Jared, who plays Danny Zuko in Grease.

In PerformANTs, he, Chyna, Olive, and Angus pretend to be a kiddie band so that Roxanne will let them go to a rock concert with the older kids.

In Some EnchANTed Evening, he fakes a girlfriend after Chyna fakes her boyfriend after he asks her out.

In PatANT Pending, he and Olive work together against Chyna to design a new revolutionary kind of backpack. 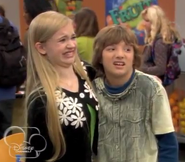 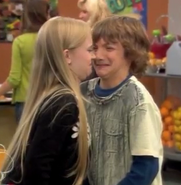 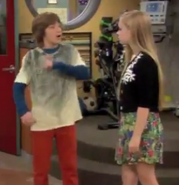 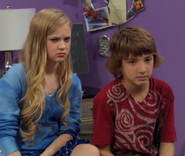 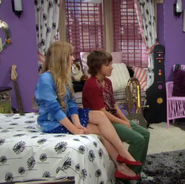 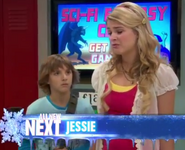 Fletcher and Olive kissing
Add a photo to this gallery
Retrieved from "https://disney.fandom.com/wiki/Fletcher_Quimby?oldid=3299932"
Community content is available under CC-BY-SA unless otherwise noted.