Light
Flicker is a 4-year-old flashlight who is still learning English and speaks Spanish completely. Felipe is the only tool that can talk to him, though he is slowly picking up English. He was originally owned by Uncle Hugo and later given Manny. As of Handy Manny's School for Tools, he appears to be fully bilingual. He is currently the "youngest" tool.

Flicker is an orange and blue Flashlight. He has freckles underneath his eyes. Turner described him as a "cute, little guy". Flicker is revealed to be four inches in height as shown in Manny's School for Tools when Stretch measured him.

Flicker is extremely cheerful, affectionate and excitable. Flicker seems to love spots as seen in "Manny's Makeover" when he became distracted by Manny's shirt when he's supposed to turn on his light for Manny. He later got sad when he put on a different shirt that Mrs. Lopart gave him. Flicker seems to love food cause when Flicker sees food he wants to eat it and seems to love the taste or smell. The love for food was revealed in "Elliot's New Job" when Flicker wanted to eat popcorn. Flicker is just proud of his light and believes he's the one and only light source. Flicker is shown to also know how to communicate with birds as shown in "Pat Lightly" when he talked to a bird. Whenever Flicker turns on his light he says "Luz! Luz!". For Flicker to turn on his light they ask him "Flicker, Luz, por favor". Flicker loves to shout Spanish phrases. When he's excited he flashes his light.

Flicker also has a fondness of soft, fluffy things when in "Picture Perfect" when he wanted to buy a pillow. Flicker doesn't like libraries but seems to enjoy looking at picture books as shown in "The Great Donate." Flicker really dislikes loud noises or constant sounds that cause him to become overwhelmed and screams "Ay! Ay! Ay!" so loud that Manny can hear it. Flicker got quieter in season 3. 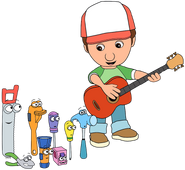 Retrieved from "https://disney.fandom.com/wiki/Flicker?oldid=4005580"
Community content is available under CC-BY-SA unless otherwise noted.