Glomgold
Flinty (by Scrooge)
Duke Baloney (in the DuckTales reboot only)

Diamond mine owner
CEO of Glomgold Industries (DuckTales reboot only)

To become the richest duck in the world

Flintheart Glomgold is Scrooge McDuck's arch-nemesis and business rival, primarily because of their long-lasting feud concerning which of them deserves the title of "World's Richest Duck". Glomgold's hatred of Scrooge McDuck is his jealousy of Scrooge's wealth and desperately wants to obtain the title, but is usually referred to as "World's Second Richest Duck".

Flintheart will attempt any possible underhanded deed in order to defeat Scrooge and occasionally hires such thugs as the Beagle Boys to do his dirty work.

Glomgold was created by Disney Legend Carl Barks, and made his first appearance in his 1956 comic The Second-Richest Duck (Uncle Scrooge #15). Under Barks authorship, Glomgold hailed from South Africa, where he made his fortune in diamond mining. He was appearance as an elderly duck with a short beard and wearing in a black coat and a bonnet and was depicted as a ambitious miser and plutocrat, which ready breake the law in order to fulfill his goals.

Barks only used Glomgold three times in his stories, however renown "duck" writer and artist Don Rosa, considered to be Barks' true successor, brought the character back in 1987. That same year DuckTales premiered and Flintheart was a major character in the series, bringing him fully back into the spotlight. However, some drastic changes came to the character, mainly, touched on his nationality and design. He became Scottish, just like McDuck and appearance in a traditional Scottish kilt about with a much longer beard and his voice actor Hal Smith gave him an unidentifiable generic accent instead of an Afrikaans accent.

Selfish, sneaky and incredibly greedy, Glomgold strive to become the world's richest duck. He hates being second only to Scrooge and often uses immoral methods, to get around him. But the thing that makes him such a cruel is the fact that he will cross every line to achieve his goals, even to the point where he might try to murder Scrooge. However, this often leads to his downfall what into Glomgold's bitterness and intensifies his hatred of Scrooge.

Like Scrooge, Glomgold also has a love for money and gold, however, unlike him, he is dishonest and often resorts to cheating, or using other unfair tactics to increase his fortune. He also cares for no one other than himself, acting as a loner at some points. While Scrooge has his nephews and friends, helping or advising him, Flintheart often faces situations alone. This hardened him, he became more ruthless than Scrooge, but also leaves him vulnerable to being simply outnumbered by his rivals.

Many of Glomgold's appearances are centered around the fact that he is similar to Scrooge in so many ways (even having a Money Bin that is nearly identical to Scrooge's), both in appearance and personality. However, unlike Scrooge, who does not believe in obtaining money through dishonest methods, Flintheart makes immoral decisions, which often leads to his downfall.

Glomgold serves as one of the main antagonists of the series, making recurring appearances. As in the comics, Glomgold tries his best to become the world's richest duck.

Under Carl Barks comics, Glomgold hailed from South Africa. However, when he made his animated debut in the TV series DuckTales (1987-90), the U.S. government had tensions with the Republic of South Africa. Wishing to avoid controversy, as South Africa had been associated with apartheid and not with diamonds at that time, the Disney animators changed Glomgold's domicile from South Africa to Duckburg, and further accentuated his Scottish origins. Another departure from the comics was that Glomgold is also just as notoriously stingy as Scrooge, but even more so, whereas Scrooge will at least be generous with his money on occasion. The animated Glomgold was shown as a big spender. This may have been an amalgamation of another one of Scrooge's rivals, Rockerduck, who did not appear in DuckTales.

He makes his series debut in the second part of the pilot movie "Treasure of the Golden Suns", in which Scrooge and his nephews find a map to a sunken treasure. Glomgold teams up with a villain named El Capitan to stop Scrooge and gain the treasure for themselves.

He would go on to the scheme and battle Scrooge in several episodes. Some of his evil deeds include framing Scrooge for theft and having him arrested, banishing Scrooge to a remote island through the power of a genie, and even having Scrooge's own employees work for him. He was also given John D. Rockerduck's habit of eating his hat when defeated by Scrooge.

Glomgold makes a cameo appearance in the Darkwing Duck episode "In Like Blunt", along with the Beagle Boys and Magica DeSpell, among the bidders for the secret S.H.U.S.H. agent list. 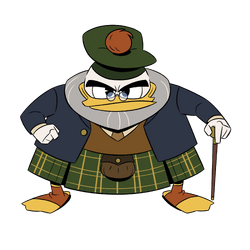 Glomgold returns in the rebooted DuckTales as an antagonist and, once again, Scrooge's sworn enemy. He is aggressive, cruel, unhinged, and generally more bumbling than his original 1987 version. This incarnation of Glomgold is also rather hefty in weight and has a fake beard. In a reference to the way the 1987 series changed his nationality from South African to Scottish, this incarnation of Glomgold outwardly appears Scottish, but is really South African, affecting the Scottish persona as a way of outdoing Scrooge by being "more Scottish" than him.[5][6]

As revealed in a flashback in "The Ballad of Duke Baloney!", his birth name is Duke Baloney (a reference to the Duke of Baloni, a different "second richest duck" character that appeared in one of Barks' comics before Barks created Glomgold).[7] As a young duck in South Africa, Duke was a shoeshiner who shined Scrooge's spats. Impressed by the lad's drive, Scrooge attempted to replicate the lesson in self-reliance that he had learned as a boy by paying the young Duke a single dime for his services, but Duke didn't take the lesson well. Instead, he felt cheated and pickpocketed Scrooge's money clip, then used the cash to invent himself as "Flintheart Glomgold," beginning a lifelong quest to outdo Scrooge in every way, becoming richer, more successful, and even more Scottish.

He first appears in "Woo-oo!", where he seeks to become the world's richest duck by acquiring the Jewel of Atlantis. He inadvertently grabs a cursed gem and is dragged off by a giant squid. In "The Shadow War!", Glomgold grabs onto his rogue shadow, brought to life by Magica De Spell, and is pulled away from his office. His fate is revealed in "The Ballad of Duke Baloney!" having been thrown into the water and is later found by two fishermen, Fisher and Mann, suffering amnesia, and thus takes on the identity of Duke Baloney. At the climax of the episode, as Glomgold swims to save Webby Vanderquack and Louie Duck from a freak storm, he regains his memory. Immediately afterward, he retakes his company, he taunts Scrooge with his personalized money clip that he swiped from him back in South Africa and makes a wager over whoever becomes richer than the other can seize the other's company.

In "GlomTales!", with only two days to win the bet, Glomgold begins recruiting Scrooge's enemies, including the Beagle Boys, Mark Beaks, Don Karnage and, reluctantly, Magica De Spell, for the purpose of forming his own family to defeat Scrooge's. But when the villainous alliance invades McDuck Manor, they find only Louie Duck present, resulting in Glomgold being criticized for failing to check if Scrooge was home. Louie proposed the villains all contribute their fortunes to Glomgold, making him more wealthier than Scrooge with Louie as a partner. But as Glomgold's name is fake, by their contract, all their combined fortunes go to Louie. Glomgold was soon the focus of the villains' anger for being duped by a child, forcing him to flee.

In "Moonvasion!", however, Glomgold returns to help Scrooge defeat the Moonlanders with one of his insane schemes, since General Lunaris had a counter for all of Scrooge's plans. While he uses the scheme to trick him into returning his company to him, he otherwise doesn't double-cross him, and his scheme actually succeeds in derailing Lunaris' plan to make the Earth revolve around the Moon, which he happily takes credit for afterwards.

In "They Put a Moonlander on the Earth!", he's still taking credit for defeating Lunaris and has hired a Moonlander named Gibbous as his new assistant. He has since opened up a new amusement park, during which he unveils a new Ferris wheel that he secretly hid a cannon in to destroy McDuck Manor and get rid of Scrooge. Like most of his schemes though, it fails miserably due to the shoddy condition of the wheel.

In the comics, he owns a money bin that mirrors Scrooge's. However, it is situated in the Limpopo Valley in the middle of a South African jungle, as opposed to Scrooge's which is in the center of Duckburg.

In "The Life and Times of Scrooge McDuck", Glomgold first meets Scrooge while Scrooge is prospecting for gold in South Africa. Glomgold, however, is caught attempting to steal from a diamond miner's pit claim and runs off, thus showing his dishonest tendencies immediately. In his initial introduction, he says he's a Boer (a descendant of Dutch-speaking settlers in South Africa). He later steals everything from Scrooge's camp (including his campfire) and when Scrooge later confronts him, he declares Glomgold "made him mean".

Glomgold made brief appearances in both of the NES DuckTales video games.

At the end of the first game, after Scrooge defeats Dracula Duck, Glomgold shows up, being airlifted by a vulture (presumably a transformed Magica De Spell), and Scrooge must climb a rope up to the five treasures in order to win the game. If Glomgold reaches the treasures first, the player loses a life and has to fight Dracula Duck again. The HD remake, DuckTales Remastered, appears to expand on Glomgold's role in the game, adding in a sub-boss fight against him midway through the Himalayas level. It's also later revealed that he is the main antagonist alongside Magica. He and Magica teamed up sometime prior to the events of the game and manipulate Scrooge into collecting the five treasures so Magica could use them to summon Dracula Duck.

In DuckTales 2, after Scrooge finds all of the treasures, Glomgold takes Webby hostage and holds her for ransom on the pirate ship in the Bermuda Triangle. Scrooge gives Glomgold the treasures, only to discover that this "Glomgold" is actually a shape-shifting robot called the D-1000, programmed to destroy him. After the D-1000 is defeated, the real Glomgold sinks the ship and tries to take Scrooge and the treasures with it.

DuckTales: The Quest for Gold

In this game Glomgold appears as the main antagonist. In the intro scene, he barges into Scrooge's office, lamenting about he is tired being the second richest duck in the world, and challenges Scrooge to a wealth contest sponsored by Dime Magazine: in the next 30 days, the one who collects the most treasure shall be the Duck of the Year. The contest is held in the Isle of Macaroon, which is a homage to the four-parter "Catch as Cash Can" episode, except that the contest gives 30 days, not 10. As in the episodes, Glomgold hires the Beagle Boys against Scrooge and his nephews, and will constantly try to race Scrooge to the treasure locations, or snatching treasure from other locations. The ultimate goal of the game is to collect more money, thus, beating Glomgold and becoming Duck of the Year.

The Disney Wiki has a collection of images and media related to Flintheart Glomgold.

Retrieved from "https://disney.fandom.com/wiki/Flintheart_Glomgold?oldid=4335677"
Community content is available under CC-BY-SA unless otherwise noted.