Elena and the Secret of Avalor (cameo)

“This is some boat you have.”
―Oona admiring the Floating Palace.

The Floating Palace is a big ship that appears in the Disney Junior series Sofia the First. Being called a Floating Palace is because it is both a castle and a boat which serves as a private yacht for the Royal family of Enchancia, with Admiral Hornpipe in command.

How the Floating Palace is able to move without the use of sails remains unknown, it is possible it runs by paddle motors or by magic. The palace itself features a library, a throne room and a sorcerer's workshop for Cedric located in the tower at the back of the ship where there is also a swimming platform. The Floating Palace even includes for emergencies a life boat big enough for long distant sea travel. 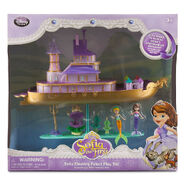 A playlet of the Floating Palace 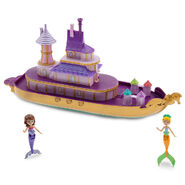 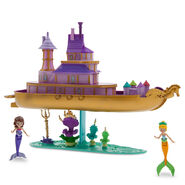