1931-1951
Florence Gill was an English actress and voice actress.

For Disney, she provided the voices of Walt Disney's Clara Cluck, The Wise Little Hen And Assorted Fowls. She also provided the clucking sound effects of the condors, chickens, hens, and roosters in a number of Mickey Mouse, Donald Duck, Chip and Dale, Pluto, and Silly Symphonies cartoons. She even appeared in live-action in the film, The Reluctant Dragon alongside Clarence Nash to cluck an operatic duet as Clara alongside Nash's Donald, most likely for Mickey's Grand Opera. In the 1935 musical comedy Every Night at Eight And Here Comes The Band, she performed her musical hen impersonation in front of a radio microphone. Her interment was located at Chapel of the Pines Crematory in Los Angeles, California. 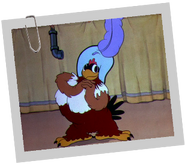 Add a photo to this gallery
Retrieved from "https://disney.fandom.com/wiki/Florence_Gill?oldid=3970389"
Community content is available under CC-BY-SA unless otherwise noted.