Adrienne Brown Norman
Floyd E. Norman is an American animator, who worked on the Walt Disney animated feature films: Sleeping Beauty, The Sword in the Stone, and The Jungle Book, along with various animated short projects at Disney in the late 1950s and early 1960s. In 1956, he was the first African American animator at the Disney studios. At age 86, he still works as a storyboard artist, and is a freelance consultant for the Walt Disney Company.

Norman had his start as an assistant to comic book artist Bill Woggon, who lived in the Santa Barbara, California, area that Norman grew up in.

Norman first joined the Disney studio in 1956. As an in-betweener on Sleeping Beauty, he assisted Frank Thomas working on the fairies Flora, Fauna, and Merryweather. As an assistant animator on Mary Poppins, he worked on The Pearly Band. As a story artist on The Jungle Book, he was responsible for much of the gags in the "Trust in Me" sequence with Mowgli and Kaa, and for the Vultures.

After Walt Disney's death in 1966, Floyd Norman left Disney Studios to co-founded the AfroKids animation studio, with business partner animator/director Leo Sullivan. Norman and Sullivan worked together on various projects such as the original Hey! Hey! Hey! It's Fat Albert television special, which aired in 1969 on NBC (not to be confused with the later Fat Albert series made by Filmation Associates).

Norman returned to Disney at one point in the early 1970s to work on the Disney animated feature Robin Hood, and worked on several animated television programs at Hanna-Barbera and Ruby-Spears. In the 1980s he worked as a writer in the comic strip department at Disney and was the last scripter for the Mickey Mouse comic strip before it was discontinued.

Norman has also published several books of cartoons inspired by his lifetime of experiences in the animation industry, such as Faster! Cheaper! (ISBN 978-0942909029), Son of Faster, Cheaper! (ISBN 978-1941500378), How the Grinch Stole Disney, Disk Drive: Animated Humor In The Digital Age, and Suspended Animation: The Art Form That Refuses To Die. Norman's latest book, titled: Animated Life: A Lifetime of tips, tricks, techniques and stories from an animation Legend (Animation Masters) (ISBN 978-0240818054) was published by Focal Press in 2013 [1] Debuting at the 2017 D23 Expo , Disney Editions published the picture book: A Kiss Goodnight (ISBN 978-1484782286) written by Richard Sherman and illustrated by Norman. [2]

Norman is currently a columnist for the websites JimHillMedia.com, AfroKids.com, and contributes to his own blog.

Floyd Norman: An Animated Life, a feature length documentary on his life and career was released in 2016. [3]

"Floydering" is a phrase first used by friends and colleagues at the Walt Disney Studios (and eventually adopted by the Disney fan community) to describe Norman and his particular creative process. The phrase was further expounded upon in a short video unveiled at Norman's 80th birthday party held at Disney Studios. [4][5]

Norman was a recipient of the Winsor McCay Award for Recognition of lifetime or career contributions to the art of animation at the 2002 Annie Awards.[6] Norman was named a Disney Legend in 2007.[7] In 2008, he appeared as Guest of Honor at Anthrocon 2008 and at Comic-Con International, where he was given an Inkpot Award.[8] In 2013, Norman was honored with the "Sergio Award" from The Comic Art Professional Society (CAPS). [9] In 2015 Norman received the Friz Freleng Award for Lifetime Achievement for Excellence in Animation from the International Family Film Festival.[10][11] In 2016 Norman was appointed to the education and outreach committee of the Academy of Motion Picture Arts & Sciences.[12][13] In June 2018, Norman received an honorary Doctorate of Philosophy degree from Cogswell Polytechnical College. [14] 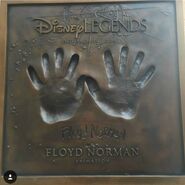