To turn St. Canard into a city ruled by cats (fails)

His minions not listening to him, humans

Returns to the St. Canard Penitentiary

"I am not 'cute'! Whoever heard of a cute thupervillain?!"
Fluffy is an occasionally recurring antagonist from the Darkwing Duck comics printed in Disney Adventures. He is a non-anthropomorphic kitten whose intelligence was increased as a result of Dr. Meddle's experiments at the St. Canard Research Center. He leads a band of numerous cats just like him, but due to them being ordinary cats, they often do not pay attention to his plans. Fluffy proved to be a popular enough villain that he became, at the time, the only Darkwing Duck villain created for the Disney Adventures comics to appear more than once, and would eventually also reappear in the Joe Books Darkwing Duck comic.

The first story to feature the character was "The Kitty Kat Kaper", published in the July 1992 issue. Having just gained his high IQ, Fluffy has already escaped the S.H.U.S.H. labs from which the experiment occurred, leaving behind a forged (and badly-spelled) ransom note. Darkwing and Launchpad place the demanded satchel of money in the trash can they're told to bring it to, then disguise themselves as hot dog vendors while they wait for the crook to show up. But they get distracted and do not notice a cat making off with the satchel. Upon finding the satchel is gone now, Darkwing finds a note in the trash can that brings them to a hotel room where several of the other villains are eating chicken and watching The Miss Corn Fritters Pageant on TV. After the end of the show (the pageant was on pay-per-view, and the villains were not willing to miss it after all the money they put down for it), Darkwing then proceeded to defeat, arrest, and interrogate the group of criminals, only to learn that none of them knew anything about Fluffy. Shortly afterward, Darkwing and Launchpad catch sight of the cat who took the satchel. They give chase until they are finally led to Fluffy. After revealing himself to be the mastermind behind the entire scheme, Fluffy sics his minions on Darkwing and Launchpad, but Darkwing manages to scare the cats away and captures Fluffy. The events in this story are retold as "The Kitty Cat Caper!" in issue #5 of the Joe Books comic.

Fluffy eventually breaks out of the St. Canard Penitentiary in "Cat in a Hot Tin Suit" (published in October 1993 issue), taking refuge in an abandoned tuna factory along with his minions, who don't really have a clue what he's saying. After appointing a cat named Al to his second-in-command for being the only one of them to raise his paw when told to (he was actually trying to swat a fly), Fluffy sends his minions to the Grocerama supermarket to steal all the cans of tuna. This action confuses Darkwing and Launchpad, but it is subsequently revealed (to the readers) that Fluffy has used the tin cans to make himself a suit of armor (hence the story's title) that allows him to walk on two feet, complete with gloves that give him opposable thumbs. He then challenges Darkwing to a duel and soundly defeats him. With the heroes out of the way, Fluffy and the cats take over the city. However, Fluffy becomes bored in his luxury penthouse and decides to increase Al's intelligence. Darkwing and Launchpad sneak in during this and distract Fluffy long enough for Darkwing to snatch away Fluffy's robotic gloves. Fluffy attempts to get away, but his rocket pack dies out and Darkwing nabs him again; after returning Fluffy to the penitentiary, Darkwing gives him his robotic gloves back. Grateful for this, Fluffy decides to live out his sentence peacefully.

Fluffy's third appearance was in a two-part story titled "Fluffy's Reign of Terror!" in the February and March 1994 issues. This story opens with Fluffy having (seemingly) been rehabilitated and thus set free from jail. Still bent on taking over the city and having regained his robotic suit, Fluffy fills St. Canard with a green snow-like substance he calls "Flee Powder", which fills anyone who comes in contact with it the urge to evacuate thousands of miles away. Darkwing and Launchpad are initially affected by the powder, but eventually return to St. Canard where they distract Fluffy's feline minions with fish. Just then, Megavolt, Bushroot, and Liquidator (who, being mutants, were not affected by the Flee Powder) show up to make fun of Darkwing. Fluffy, having seen Darkwing's return, also shows up. Darkwing and Fluffy fight while Launchpad subdues the other three villains. Eventually, Fluffy surrenders and decides to go back to the penitentiary willingly, because, as he states, it's no fun being the boss of a bunch of minions who never listen.

Fluffy makes his return in the second chapter of the "Orange is the New Purple" arc that opens Joe Books' Darkwing Duck comic book. Mortimer L. Marquand, having gotten lost inside St. Canard's new maximum security penitentiary after Negaduck locks him, Darkwing, and Gosalyn in it, wanders into the solitary confinement chamber and comes upon Fluffy, who is still locked in his cell. Fluffy, who is obscured in the shadows at this point, recognizes Mortimer as Cat-Tankerous and makes a deal with him offscreen. At the end of the arc's concluding chapter, it is shown that Mortimer managed to get Fluffy out of his cell and sneaked him out of the prison in his backpack. As of this writing, it remains to be seen what the rest of their deal is, though the last page of issue #5's story suggests it has something to do with the Cat-Tankerous suit. Unfortunately, due to the comic being cancelled, it will never be shown what they are up to.

Fluffy as he appeared in the original comics. 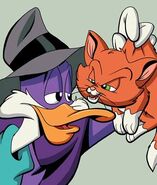 Retrieved from "https://disney.fandom.com/wiki/Fluffy_(Darkwing_Duck)?oldid=3514762"
Community content is available under CC-BY-SA unless otherwise noted.