Nigel and the pelicans from Finding Nemo

A rock near the Marine Life Institute

Laying on their rock, sleeping

Gerald and other seals/sea lions sitting on their rock, anybody disturbing them while they're sleeping

“Those are sea lions, they're natural predators. They could pounce at any moment.”
―Marlin to Nemo

Fluke and Rudder are two sea lions in the 2016 Disney/Pixar animated film, Finding Dory. A running gag is when Gerald comes up on their rock, both of them bark, "Off! Off! Off!" at him to prevent other seals/sea lions from sitting on their rock.

Fluke and Rudder first appear when Marlin and Nemo accidentally wake them up from their nap on their rock. When the clownfish family asks them about the Institute, they tell them that it is a fish hospital, while describing their experiences there (Fluke with a nasal parasite, and Rudder having anemia). Their discussion is interrupted by the arrival of Gerald, whom they shoo off. The sea lions help the clownfish get in the Institute by calling their loon friend, Becky, to fly them in there. When Marlin mentions that he and Nemo need water, they trick Gerald into giving up his pail by inviting him on their rock before promptly kicking and shooing him off.

They next appear near the end as they watch the excitement of Dory saving her friends by vacating their rock (which is promptly taken over by Gerald) and despite not helping Dory, they are showered with fish (even being hit by a large one).

They last appear after the end credits where they are sleeping again on their rock, briefly shooing off Gerald again when he attempts to gain entry on the rock. They witness the Tank Gang being taken by the humans before resuming their nap, unknowingly being stalked by Gerald, who gives a devious laugh.

Fluke and Rudder appear in this short film where they comment on Dory about her encounters with the residents of the Marine Life Institute, along with Destiny, Bailey, and Hank.

In Disney California Adventure, Fluke and Rudder can be seen in a Finding Dory-inspired billboard at Pixar Pier telling visitors to keep Pixar Pier clean, along with some sea otters, Gerald, and Dory. 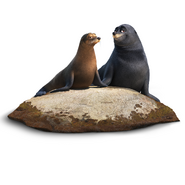 "Don't you worry about a thing. That place is the Marine Life Institute. The Jewel of Morrow Bay, California."

"Your friend is going to be in quarantine."

"That's where they take all the sick fish."

"Becky, these two nice fish need to get into Quarantine."

"All you have to do is imprint with her, mate."

"Thank you so much, Gerald!"
"Welcome to your time on this rock."
"Comfortable, isn't it?"

Fluke and Rudder leave their rock to watch the climax

"Gerald? Have you lost your marbles?"
"Don't get used to it, Gerald!"

Fluke and Rudder excited that it's raining fish

Fluke and Rudder hit in the face with a large mackerel.

Gerald approaches Fluke and Rudder on their rock 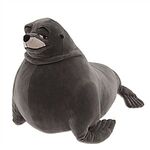 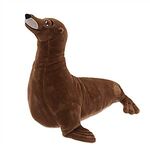 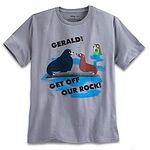