Being dismissed
Flunkey is a feisty, ill-behaved Bandar-log that served as King Louie's servant in The Jungle Book. Despite his kinetic nature, he speaks with a prim and distinguished British accent in the original film.

Flunkey is first seen fanning King Louie, and then later during the song "I Wanna Be Like You", Flunkey is seen annoying King Louie by trying to steal the spotlight and gets thwarted a few times. He is last seen at the end of the song dancing and singing.

Here, Flunkey is known as M.C. Monkey and has taken over the ruins as King Louie is said to have deserted it. His mannerisms in this film are far more like King Louie than his own in the original. He is seen in the middle of the film introducing Baloo to the party of animals at the ruins. He is last seen listening to Baloo's stories of the Man Village and how "horrible" it is.

Flunkey somehow made a few appearances in TaleSpin, as an Employee at Louie's Place with the rest of the Bander-log monkeys.

In "Mumbai Madness", Flunkey briefly appears alongside King Louie as they chase after Mickey during a travel montage.

Flunkey with King Louie and Bandar-log

Flunkey as he appears in the original film

Flunkey with Louie and Mowgli

Flunkey/ M.C. Monkey in the The Jungle Book 2

Flunkey with Bandar-log and Baloo 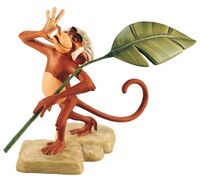 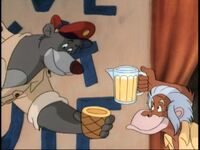 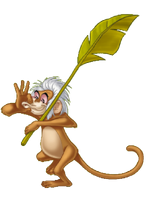