Follow Me, Boys! is a 1966 family film released through Walt Disney Pictures, based on the book God and My Country by MacKinlay Kantor. It was the last production Walt Disney released before he died of lung cancer just two weeks later. The film starred Fred MacMurray, Vera Miles, Lillian Gish, Charles Ruggles, and Kurt Russell, was co-produced by Walt Disney and Winston Hibler, directed by Norman Tokar, and written by Louis Pelletier. It is one of the few movies where Boy Scouts are key to the film and is Disney's paean to the Boy Scouts. The title song "Follow Me, Boys!" was written by studio favorites Bob and Dick Sherman. For a time, after the film was released, the Boy Scouts of America was considering using the song as their anthem but efforts toward this end were eventually dropped. The film is also known by its working title, On My Honor. This is the first of ten Disney films which Kurt Russell would appear in over the next ten years. A DVD version was released on February 3, 2004.

Lemuel "Lem" Siddons (Fred MacMurray) is a saxophonist in a traveling band in 1930 who dreams of becoming a lawyer. When the band's bus reaches Hickory, a small town, Lem suddenly decides to leave the band and settle down, finding a job as a clerk in the general store. At the civic meeting, Lem notices that Vida Downey (Vera Miles), to be his future wife, eliminated the YMCA and the 4-H from her list of three possible organizations to keep the town's boys off the streets, leaving only the Boy Scouts, and volunteers to become Scoutmaster of newly formed Troop 1. Lem turns out to be an all-around natural leader, and as he becomes more and more involved with the Scout troop, he finds his plans to become a lawyer being put on the back burner while he wins over the town's favor a little at a time, even as he encounters life's troubles along the way. Lem's life became fulfilled helping the town's boys, especially former troublemaker Whitey (Kurt Russell), mature into men. In appreciation, the entire town gave Lem a surprise celebration on 2 October 1950 (which actually fell on Monday, not on Saturday), with (apparently) all of the Scouts during the twenty years of Troop 1 in attendance. 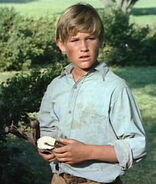 Retrieved from "https://disney.fandom.com/wiki/Follow_Me,_Boys!?oldid=4170800"
Community content is available under CC-BY-SA unless otherwise noted.