Riders in the Sky

Mike's New Car
For the Birds is a Pixar computer-animated short film written and directed by Ralph Eggleston. Its worldwide debut occurred at the Annecy Film Festival in France on June 5, 2000. It would later premiere in the United States at the 27th annual Siggraph conference on July 24 of that same year, and was attached to the theatrical release of Monsters, Inc. in 2001. It was re-released on December 19, 2012 with Monsters, Inc. in 3D. The film won the Academy Award for Best Animated Short Film.

Fifteen blue birds land one-by-one on a power line, where they encounter a huge and goofy-looking bird. They mimic and tease him, but he goes on the wire, anyway. Since the big bird is heavier than the smaller ones, the wire drops under his weight. To make him let go of the wire, the little birds start pecking on his toes. They successfully get him off, but when the big bird falls off, the birds are flung away into the sky when the wire snaps back up. When they come back down, we see that they have all lost their feathers, making them the goofy-looking ones now. The short ends with the big bird laughing hysterically as the other birds hide behind him.

The first four small birds to land on the power line are named Bully, Chipper, Snob and Neurotic.

Ralph Eggleston had this to say about his inspiration for the short:

"Probably visits to my aunt when I was a kid. She lived in the country and I spent long rides to her house peering out the car window at birds on a wire. Also, I did a project in my design class at CalArts that my friend, Ken Bruce, told me might make a good film. I boarded it out at CalArts, but frankly, I couldn’t imagine the difficulty of drawing all those birds. Little did I know it would be just as difficult on the computer!"

One of the smaller birds upon realizing he is flightless and bare, losing his vanity.

All the small birds realize they have lost their flight and feathers.

"For the Birds" boat in Finding Nemo

The birds on the power line in Cars 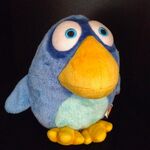