The Ford Motor Company
The Ford Magic Skyway was an attraction at the 1964-1965 World's Fair sponsored by the Ford Motor Company. Guests were seated in an actual new Ford model car from the assembly line and traveled through time into the ancient past and into the future. At one point, the Skyway traveled over a small section of the ground walkway before returning to the show building's big finale. The entire ride had to be scrapped at the end of the fair, but lead to many ideas in further rides, such as PeopleMover, Universe of Energy, Spaceship Earth, and World of Motion.

Walt Disney, who didn't supervise this project, instead of focusing on the Carousel of Progress, wanted an attraction that entertained and was difficult to create at the same time. Imagineers who worked on this attraction came up with the idea to have different dioramas and a ride vehicle showing each rider them. Thus, the Magic Skyway was born. Like most Disney rides, a corporate sponsor was needed to provide funding. Ford put their hat in the ring, whose only request was that the ride vehicle is an actual new Ford car. This did puzzle Imagineers on how they would move the vehicles, and they found their results in how Ford moved their projects around. They created a track chain with wheels spaced every three feet. They then welded a metal plate onto the undercarriage of the car. This ride system would later be adapted for use in Disneyland's PeopleMover.

The original 1961 show concept for the attraction was titled Symphony of America, a driving tour through various American landscapes such as the Grand Canyon, southwestern deserts, Florida Everglades, California redwood forests, and Louisiana bayous set to a classical music score. Ford rejected this pitch as they wanted something bigger in scope and they felt it was too similar to a "See the USA by Chevrolet" marketing campaign by their rival General Motors. This led to the Imagineers to develop a time travel attraction instead.

Traveling on Ford cars connected to a ride system that would evolve into the Peoplemover and Omnimover systems, the ride took guests through time, a journey introduced by Henry Ford II and narrated by Walt Disney himself. This began with a trip through the age of dinosaurs including scenes of grazing sauropods, a triceratops family and the clash between Stegosaurus and Tyrannosaurus. Time would transition the vehicles to the age of man, heralded by a caveman greeting the rising sun. Other scenes included cavemen working to hunt a mammoth, a caveman warning another about an oncoming predator, the first ancient artists, the creation of fire, and the invention of the wheel with a caveman explaining his invention. While a cart of cavemen prepares to travel away from the cave into the world beyond, another transitional sequence takes the vehicles into a futuristic city and then back to the loading station.

Once the World's Fair ended, the four Disney rides were removed. While It's a Small World, Great Moments with Mr. Lincoln and Carousel of Progress made it to permanent homes at Disney theme parks, there wasn't enough room for Ford Magic Skyway and Walt was dissatisfied with the cavemen. Walt offered Ford Motors a reimagined version of the attraction at Disneyland, but the company declined. The ride's system was later used in PeopleMover which debuted in 1967. The dinosaurs were salvaged to become the Primeval World diorama for the Disneyland Railroad in July 1966. The mammoth the cavemen were attacking was de-furred and placed in the Jungle Cruise at the back of the Elephant Bathing Pool. Everything else was either dismantled to be reused as other parts or was outright destroyed. 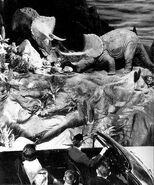 Figure testing from Disneyland Goes to the World's Fair