Professor Foreman Takeda is a fictional character and antagonist who appears in the comic book series W.I.T.C.H.. He's the primary villain of the Eighth Arc, Teach 2b Witch.

In appearance, he's a great scientist, who was working for years with "The Cold", designing and implementing a variety of equipment, from refrigerators to air conditioners, and also with the cryosurgical science. Takeda created Coldness, a powerful machine, able to freeze anything and able to get off just three degrees from absolute zero (or -273.15 degrees Celsius).

In reality, the life of the genius is intricate and very sad: his daughter Mariko, a big scientist like him, discovered that there are other worlds, worlds which vibrate with a speed to high that it is impossible to reach using normal means, and tried to explore them. In one of her experiments she nearly lost her life. Then Takeda put her body in a strange bathtub full of liquid, attached to numerous tubes, while he seeks a way to bring her back to live, and get his revenge on everything that's magic on Earth.

He has another daugther called Shinobu, but he cares little about her, making Shinobu thinked she was nothing to her father. He managed, with the help of Mariko's lover form the Fast World, Liam, to send the Guardians, along with Will's little magical brother, William, to the Fast World, but Shinobu unexpectly shows up, revealing that he knows about everything and injects herself with the special fluid that Takeda made to help Liam vibrate more slow to remain on Earth more time. This forces Takeda to reopen the door to the Fast World in order to send Shinobu there to recovered from the fluid effects, proving that he really cares about his younger daugther, but one of the security robots malfuncionated because of the ice and frozen him in a block of ice.

After the W.I.T.C.H. defeated the White Queen, he was released by Shinobu and a returned Mariko. Hearing Shinobu's accusations about none of that would happen if he didn't done the things he done, Takeda's coldness breaks and, with tears of joy in his eyes, finally admitted that he did all of that only because of the love he has to his daughters. Mariko and Shinobu forgive their father, understanding that his cold heart was actually full of warm paternal love. 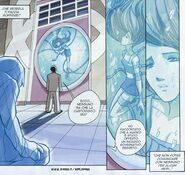