Mickey's Once Upon a Christmastime Parade

Being a toy (formerly), being away from Bonnie, upsetting his friends

“Alright, Forky. You have to understand how lucky you are right now. You’re Bonnie’s toy. You are going to help create happy memories that will last for the rest of her life.”
―Woody[src]

Forky is the tritagonist of the 2019 Disney•Pixar computer-animated feature film, Toy Story 4 and later the titular protagonist of the mini-series Forky Asks a Question. He is a handcrafted toy from a plastic spork by Bonnie Anderson and insists that he's trash and not a toy.

An actual spork-turned-craft-project, Forky is pretty sure that he doesn’t belong in Bonnie's room. Unfortunately, every time he tries to get away, Woody yanks him back into an adventure he’d rather skip. “The world of ‘Toy Story’ is built upon the idea that everything in the world has a purpose,” says director Josh Cooley. “A toy's purpose is to be there for its child. But what about toys that are made out of other objects? Forky is a toy that Bonnie made out of a disposable spork, so he’s facing a crisis. He wants to fulfill his purpose as a spork, but now has a new toy purpose thrust upon him.”

Forky is a white plastic spork outfitted with a pair of different sized googly eyes, a mouth made out of a blue wax stick, two halves of a Popsicle stick for a pair of feet held together by clay, slender arms and hands made out of a red pipe cleaner, and a unibrow made out of a red wax stick. The halves of Bonnie's name are written on each side of the bottom of feet (sticks) in blue marker. He also has a small rainbow sticker on his left foot.

Forky is first seen at Bonnie's kindergarten class being created by Bonnie. When driving back home inside Bonnie's backpack, Forky inexplicably comes alive. Woody presents the spork to the gang and Forky tries finding garbage cans.

During Bonnie's road trip, Forky flees on the highway and Woody chases him and they end up at Historic Grand Basin, and they pass an antique store, where Woody finds Bo Peep's lamp. They enter the store and encounter Gabby Gabby and The Bensons. The troupe captures Forky and keep him in the store.

Meanwhile, Woody reunites with Bo Peep and they work together to get through the antique store with Buzz Lightyear, Duke Caboom, and Ducky and Bunny. When they arrive at the shelf where Forky is seen, they end up with a run-in with Gabby Gabby's gang and they exit the store, leaving Forky left behind again. After Woody leaving Bonnie's backpack in the store and giving Gabby Gabby his voice box, Bonnie finds Forky and takes him back to the RV.

Meanwhile, Bo Peep, Ducky, Bunny, and Duke Caboom return to get Woody and Gabby Gabby to Bonnie. In the RV, when the toys head out to pick up Woody, Forky takes charge of the door to not let Bonnie and her parents in. Unfortunately, Gabby Gabby ends up getting a kid of her own, Ducky, Bunny, and Duke Caboom say goodbye to Woody and the gang, and Forky returns with the entire gang and Woody says goodbye to Forky and gives him a hug after Woody decides to spend a new life with Bo Peep. Inside the RV, when they are returning back to Bonnie's house, Rex asks if Woody is now a lost toy and Buzz says he is not a lost toy. Forky looks out at the window to see Woody one last time at the RV park.

A year has passed in a mid-credits scene, Jessie says that Bonnie had a great day in her first day in first grade and presents a new utensil toy knife named Karen Beverly, with whom Forky immediately falls in love. They slightly walk to each other and slowly introduce themselves. When her first question is "How am I alive?", Forky replies, "I don't know...".

Forky returns in Forky Asks a Question, asking Bonnie's toys questions about life. He first introduces himself (and the person he's asking said question to) before asking the character:

Forky appears as a figure in the Disney parks and appeared as a costumed character in the Disney on Ice shows titled Road Trip Adventures and 100 Years of Magic, both starting on September 6 and 20 of 2019. He started skating in the latter show. 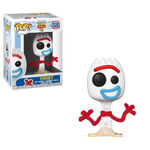 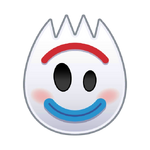 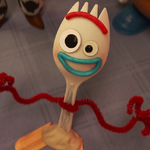 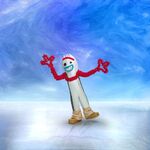 Forky in Disney on Ice