Shaman (according to Subway marketing)
The Pet Collector

Collecting and name his pets, being saved from danger

Fury
Destructor
Dream Crusher
Debbie
Various other unnamed pets
Forrest Woodbush (a.k.a. the Pet Collector) is a character in the 2015 Disney/Pixar animated feature film, The Good Dinosaur. He is a Styracosaurus (a smaller relative of the iconic Triceratops) carrying numerous animals on his horns.

"Forrest Woodbush is a mysterious Styracosaurus who lives in the wilderness. Like Arlo, he harbors unreasonable fears. His ability to blend into his surroundings helps—along with an unusual (but not-exactly-fierce) collection of forest critters he’s recruited to protect him."[1]

The collection of pets Forrest Woodbush has gathered to protect him is highly eclectic and is composed of several reptiles, mammals, as well as a few birds and butterflies. The pets whose names are known are:

Forrest Woodbush only makes a brief appearance in the film. He only appears in one scene when Spot saves Arlo from a hostile Tetrapodophis that attacked the duo in which Forrest tells him that Spot protected him from the reptilian creature while Arlo asks him to know where Clawtooth Mountain is. Forrest then asks that he needs Spot to protect him from danger like many animals on his horns. After Forrest explains to Arlo about some of his pets he has, a red Avisaurus named Debbie chirps at him to know if he needs Spot, in which he agrees that he needs Spot to protect him. Forrest explains to Arlo to know what is the name of the caveboy who saved him. After Arlo and Forrest keep saying various names, the last name Arlo says is "Spot", the caveboy then responds to Arlo and Forrest tells Arlo that he and Spot are connected, explaining to Arlo that Spot will keep Arlo safe on his journey to Clawtooth Mountain. He is last seen chasing Debbie trying to get her back when Forrest tells her that she can't have spot. He is never seen again throughout the rest of the film.

Forrest also appears as a playable character in the video game, only in Endless Mode. To unlock him, the player must collect 250 berries. 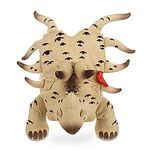 Forrest Woodbush as a plush toy at Disney Store

Forrest Woodbush as an action figure at Disney Store

Forrest Woodbush as an action figure from Tomy 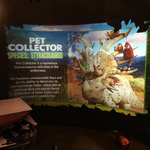 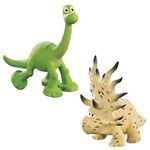 Forrest Woodbush as an small figure alongside Arlo from Tomy