She and her best friend Goosey Loosey bully Chicken Little and his friends throughout the movie. Although she seen as bad, but it's no way be called an 'evil' or 'villain' character, she and Goosey Loosey seem to love tormenting people and are easily considered bullies. Note they are only shown being mean to Chicken Little, Runt of the Litter (who has a crush on her despite this), Abby Mallard, and possibly Fish Out of Water. The two don't actually appear to hate them or wish them dead. Foxy Loxy is the class monitor and baseball star at Oakey Oaks and believes that only three things are important enough to care about: being popular, being famous, and having good hair according to the official site). A Disney comic called 'What a Scoop' reveals that she and Goosey Loosey still play with dolls. Although she often seems cruel, she actually shows some signs of kindness like when she tells Buck Cluck that no one blames him after it looks like Chicken Little lied about seeing a spacecraft. Later on, she and Goosey attack an alien robot and is beamed into their capture chamber where Chicken Little and Buck Cluck find her apparently so scared she is sucking her thumb. An error in reconstitution results in her personality being altered when her brainwaves are slightly scrambled after she was restored. (The aliens offer to turn her back to normal, but Runt and she herself seem to like herself better that way so they refuse and she is left that way.) She seems to be fully aware that she has had her mind altered and still seems to remember everything but does not want to go back. The brain affects cause her to become more girly by the ninth degree and more nice by the fifth degree. Later on, she seems to have become Runt's girlfriend and is last seen dancing with Runt during the end credits once again accompanied by her BFF Goosey Loosey. 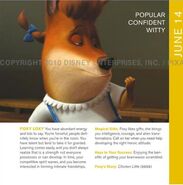 Retrieved from "https://disney.fandom.com/wiki/Foxy_Loxy_(2005)?oldid=3631327"
Community content is available under CC-BY-SA unless otherwise noted.