Francis Robert Kelly
Frances Joan "Fran" Brill is an American actress and puppeteer, who worked on Sesame Street from 1970 to 2014, performing characters, such as Prairie Dawn and Zoe.

She was the first female puppeteer hired by Jim Henson, outside of wife Jane Henson.

Outside of Sesame Street, Brill has worked on The Muppet Show pilot The Muppet Show: Sex and Violence, two episodes of the actual Muppet Show, Saturday Night Live, and Dog City, amongst many other Muppet projects. Brill was also the original performer of Janice.

Brill retired from puppeteering in 2014. She also played Lily Marvin in the 1991 Touchstone Pictures film, What About Bob? and voiced Emily Kristal Mayonnaise and Mrs. Perigrew in Disney's Doug and Doug's 1st Movie. 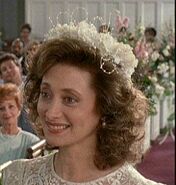 Fran Brill as Lily Marvin in What About Bob?

Fran Brill with Bill Murray in What About Bob?