Sweet (towards adults), sneaky, bossy, cunning (towards Lloyd and friends)

Her doll Rosie, bossing Lloyd and his friends around

"I love you, Rosie."
Francine Nebulon is the youngest child in the Nebulon family and the little sister of Lloyd Nebulon in the television series Lloyd in Space.

Francine was born to Nora Lee Nebulon and an unknown Verdigrean father sometime between the years of X21-X22. Ever since she was born, she has been a nuisance to Lloyd and his friends, mostly due to her whiny attitude and telekinetic powers. Later in the series, she got shrinking and growing powers.

Francine acts sweet around grown-ups (mainly her mother), but when alone with Lloyd and his friends she is manipulative and cunning, using her younger sibling status and telekinesis to get what she wants and what she wants is to annoy her big brother to no end. Despite constantly harassing Lloyd she admits to him that she loves him and that he is the world's best brother. She also teams up with her brother and defends him whenever a greater threat appears, such as Scott O'Donnell.

Despite making fun of Lloyd at times, she constantly nags him to tell her that she loves him. 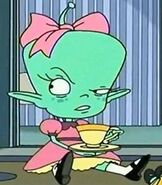 Francine with her mother

Retrieved from "https://disney.fandom.com/wiki/Francine_Nebulon?oldid=4067792"
Community content is available under CC-BY-SA unless otherwise noted.