Buster, The Dogcatcher, and Reggie

Leaves the junkyard with the other Junkyard Dogs and goes to live with a family.

"Au revoir, Buster. It has been, as you say, beautiful."
Francois is a minor character in Lady and the Tramp II: Scamp's Adventure, sequel to the 1955 film. He is one of the members of the Junkyard Dogs.

Francois is the smallest of the Junkyard Dogs. His appearance is more like a Boston terrier, and he has a French accent.

Francois is suave, loyal, kind, and rambunctious and often gets into mischief, such as getting electrically shocked. He also likes ripping apart chicken skin and doesn't like being perfumed. He has a bit of a snobbish attitude, but isn't above congratulating Scamp on his heroic actions with unusual kisses on his cheeks. He accidentally managed to get Scamp captured by the Dogcatcher and taken to the pound, with no thanks to Buster who was responsible for that accident by using his own member as bait. Francois even showed guilt and remorse for unwillingly leading Scamp into trouble. Francois eventually leaves the junkyard with the other Junkyard Dogs minus Buster, and gets adopted by a family. 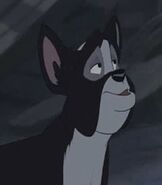 Francois howling with the other Junkyard Dogs

Retrieved from "https://disney.fandom.com/wiki/Francois_(Lady_and_the_Tramp)?oldid=3973691"
Community content is available under CC-BY-SA unless otherwise noted.