Cars on the Road (upcoming)

Being woke up in night, his Tractors being tipped

Frank is a minor antagonist in the 2006 Disney/Pixar animated film Cars.

Frank's behavior is the exact same as a bull's. He is very sensitive and gets angry, even at things that aren't worth it. He spends his days patrolling the tractor pastures and keeping everything in order, including keeping Mater out of the fields.

"Frank is a hard worker, he spends his days in the fields harvesting, threshing, and cleaning grain; then it's off to oversee the tractors' work for the rest of the afternoon. By the end of his long day Frank is ready to power down for the night and prepare for the early morning ahead. So if you're planning to wake Frank up out of his precious sleep you'd better have a good reason, or a really good escape route."[1]

He guards the tractors at night while they sleep, and attempts to get Mater and Lightning McQueen when he finds that they are tractor tipping.

Frank has a minor role in Cars. After Lightning McQueen and Mater woke him by scaring the tractors and tipping them, he chases them out of the field. He almost manages to get Lightning just before the two cars leave the pasture, where Frank cannot go past the wooden fence. Lightning later has a nightmare that he, The King and Chick Hicks are beaten by Frank who appeared out of nowhere in the tie-breaker race, with Chick Hicks not even surviving the race (Frank catches him, shreds him, and expels his remains from his unloading auger). At the end of Lightning's dream, Frank appears to be hanging out with the Dinoco racing team, roaring in anger as a humiliated McQueen is licked by tractors just as he wakes up in shock. Frank is not seen again for the rest of the film, but can be seen behind a fence with the tractors watching a drive-in movie (with all the other characters) during the end credits.

Frank makes a cameo in Mater and the Ghostlight sleeping in the field with the tractors, until Mater wakes him up by speeding in front of him with a blue lantern on his hook which he thinks was "the Ghostlight".

In Cars: The Video Game, he only appears in Tractor Tipping. He is one of the obstacles you must stay away from. If you get caught in his headlights or bump him, you automatically get caught. If you get caught, a scene will show where Frank will chase Lightning and Mater out of his field. You also get caught if you stay in a spotlight for too long or if you move close to Frank for too long.

He also appears in Cars Mater-National Championship. Basically, Frank has the same role that he did in Cars: The Video Game. You tip tractors, and try to stay away from Frank. You'll also get caught if you go too fast on gravel for a long time. In the end scene for the last level, Frank finds Mater and Lightning and chases them before they are soon trapped between him and a fence. Lightning, however, uses a horn (which is strange because he didn't have one in the film and the prequel game; he just revved his engine), and Frank actually tips over. Lightning and Mater then laugh at this. This was the only time when Frank tips over like a tractor.

Frank is not seen in the actual film of Cars 2. He does, however, reappear in Cars 2: The Video Game. Mater mentions Frank to Jeff Gorvette, Carla Veloso, and your character at the opening of the Canyon Race. Frank appears in almost all of the Radiator Springs levels. In races, Frank (who's behind a fence) roars at cars who race pass him. Frank also appears in most Hunter and Arena Modes. If you get too close to Frank, then he will fling you up in the air with his blades and cause damage to an agent.

Although not making a physical appearance in Kinect Rush: A Disney Pixar Adventure, he does appear as a wooden 2D model in the first Cars level Fancy Drivin'. It appears in a field part of the course when the player, Mater and Sheriff go into the field. The edges of the shredders make ramps for jumping.

Frank makes an appearance in Cars Land, in Radiator Springs Racers. Mater takes the vehicle tractor tipping, then they wake up Frank. He then chases away them, and you run away into Radiator Springs.

There is also a song called "Big Bulldozer", which is about Frank, that Mater sings at Mater's Junkyard Jamboree. That song is included in The Music of Cars Land.

Frank in Cars 2: The Video Game as he appears during the opening of one of the Radiator Springs races.

Frank as he appears in The World of Cars Online.

Frank enjoying a bit of A Bug's Life 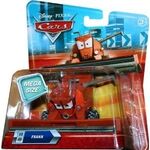 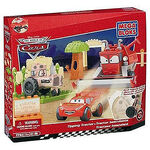