For Disney, he directed the 2006 biographical drama Eight Below and produced 2016 remake of the The BFG. He also served as producer for the Touchstone Pictures films: Who Framed Roger Rabbit, The Sixth Sense, Signs, and Miramax's the The Diving Bell and the Butterfly. 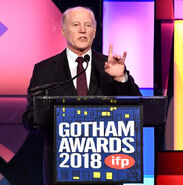 Frank Marshall speaks at the 27th annual Gotham Independent Film Awards in November 2018.
Add a photo to this gallery
Retrieved from "https://disney.fandom.com/wiki/Frank_Marshall?oldid=3778852"
Community content is available under CC-BY-SA unless otherwise noted.