Active
"Frightening" Frank McCay is a minor character in Disney/Pixar's 2013 animated film, Monsters University. A tall, light blue monster with retractable claws, numerous spikes on his head and five tentacles as legs, he is a Scaring super star at Monsters, Inc., an alumni of Monsters University, and the one who inspired Mike Wazowski to become a Scarer. He is voiced by John Krasinski.[1]

Frank appears at the prologue of the movie. He is seen entering the Scare Floor and greeting the children visiting the factory. He tells them that the best place to go in order to become a Scarer is Monsters University. Frank soon enters a child's room, oblivious that Mike slipped in with him. As the little monster looks, Frank silently walks to the child's bed, avoiding all the toys on the floor. A drawing of him in the room suggests that he has scared this child a few times before. Before he can make his move, Frank is forced to hide as clothes on a coat rack when the kid's parents enter the room. When the parents finally leave, Frank cartwheels over to the bed and wakes the child by scratching his bedpost. When the child sees Frank with his tentacles and claws outspread, he screams and Frank gets out of the room with another successful scare. He is confused to see emergency personnel on the other side with shocked faces and learns that Mike followed him inside the room. Instead of being upset, Frank is impressed by Mike's stealth. He gives Mike his MU cap and winks at him, inspiring Mike to become a Scarer.

After Mike attends MU for the very first time, he puts up a poster of Frank on his dorm room wall.

Mike later used Frank's bedpost technique to wake the scare simulator during the final round of the Scare Games.

Look behind you, Frank.

"That was real dangerous, kid. I didn't even know you were in there."

"I didn't even know you were in there." 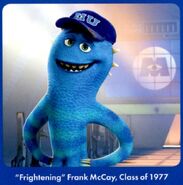 A yearbook-like picture of Frank