4
Frank Richard Oznowicz, better known as Frank Oz, is an American actor, puppeteer, director, producer, and screenwriter, who was Jim Henson's closest collaborator and best friend. He is best known for performing Miss Piggy, Fozzie Bear, Sam the Eagle, Animal, Marvin Suggs, George the Janitor, and others on The Muppet Show (he also did the hands of The Swedish Chef) and Bert, Grover, Cookie Monster, and others on Sesame Street.

For Pixar, he voiced Fungus in Monsters, Inc. and Subconscious Guard Dave in Inside Out.

As a director, his most notable film for Disney is What About Bob? (1991).

Work with the Muppets

It was with the several characters on which the two collaborated. Jim Henson and Frank Oz, together, made such memorable pairings as Ernie and Bert, as well as Kermit the Frog and Miss Piggy, and The Swedish Chef. Three other characters that Oz performed, Fozzie Bear, Grover, and Cookie Monster, would play off of Kermit on numerous occasions and there was also Lefty the Salesman, who tried to fool poor Ernie on several occasions. Other pairings of the team's characters include Rowlf the Dog and Fozzie Bear, along with Rowlf sometimes paired with Miss Piggy. Kermit also had to listen to another of Frank's characters, Sam the Eagle, endlessly complain about the weirdness of what was shown normally on The Muppet Show. Also, when it came time for Dr. Teeth and the Electric Mayhem to perform a number on any Muppet Show episode, Henson's Dr. Teeth and Oz's Animal were always positioned right next to each other on the bandstand, even after Jim died. Also, in Episode 302, when guest star Leo Sayer had asked to meet Animal, Dr. Teeth brought Animal into Leo's dressing room so Animal could meet him.

As in the case of Kermit and Piggy, on several occasions, Henson's characters usually became victim to Oz's characters and, occasionally, vice versa. For example, Kermit became Marvin Suggs' victim in Episode 506 of The Muppet Show. He was also a victim to Animal as well, such as in Episode 110, when Animal beat on Kermit like a drum to get him to forget about replacing Animal as the show's drummer.

Henson and Oz also worked together in the early 1980s while co-directing/performing in The Dark Crystal. They also played the parents in the Twiddlebug family with Henson performing the father, Thomas Twiddlebug, and with Oz performing the mother, Tessie Twiddlebug. It can be seen clearly that Jim and Frank had always been like brothers, like their primary characters on Sesame Street, Ernie and Bert, respectively, are today.

At Jim's Memorial Service, 5 short days after his death, Frank spoke of a Christmas gift Jim gave him, which he called "Bert in Self-Contemplation". He starts to cry, but manages to say "That's when I knew he loved me and I loved him."

Starting in the mid-1990s, after 3+ decades of Muppeteering, Oz began to transition himself away from his Muppet duties to focus on directing. Immediately following Muppets from Space, all of his main Muppet Show characters have been handed over to Eric Jacobson, who has also mostly taken over Bert & Grover, while David Rudman has become the new performer of Cookie Monster. Although, as David and Eric have once said, Oz usually comes in 4 or 5 times a year & will do a "Bert Day", "Grover Day", "Cookie Day", etc.

Subconcious Guard Dave
(Inside Out) 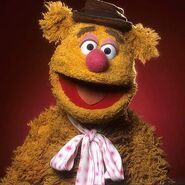 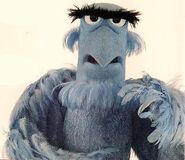 Frank Oz at the premiere of Star Wars: The Force Awakens in December 2015.