Proxima (jaguar)
Frank Wolff[1], real name Francisco Lopez de Heredia, is the main protagonist in the 2021 Disney live-action film, Jungle Cruise, based on the ride of the same name.

Francisco Lopez de Heredia was a 16th century mixed-race Hispanic man who came into the service of conquistador Lope de Aguirre. Frank was considered to be like a brother to Lope and was amongst a lost expedition where they would have died had they not been saved by the Puka Michuna tribe. The tribe brought them to health using the Tears of the Moon". When Aguirre attempted to attack the tribe to steal more of the tree's tears for his daughter, the conquistadors were cursed to remain as immortals in the Amazon rainforest.

By 1916, Francisco changed his name to Frank Wolff and worked as a skipper for a private, cheap Jungle Navigation Company attraction in Porto Velho. Here he owed money to harbormaster Nilo Nemolato who ran a more popular and successful boat company. Frank also had good relations with the Puka Michuna and their chieftain Trader Sam though he spread myths about them being cannibalistic headhunters to profit off of their exoticism.

In 1916, Frank was approached by rogue explorer Lily Houghton and her brother MacGregor in offering safe passage through the jungles of South America in search of an ancient tree called Tears of the Moon so they can take its petals back to her laboratory and turn them into a serum that will cure terminal diseases and will also allow people to live longer.

Frank's jacket can be seen hanging in the office of Alberta Falls along with that of Lily Houghton. His hat is hanging in an office within the Magic Kingdom's Jungle Cruise. The map of the Magic Kingdom's Jungle Cruise rivers appears to have been made by him as well, as a gift for Jungle Navigation Company founder Dr. Albert Falls in 1911 then augmented by Alberta in the 1930s. On the map is the message "To Albert, here's to many more adventures of a lifetime -F.W." on the bottom left corner and on the upper-right corner, "Here is adventure, here is romance, here is mystery". This map also appears aboard the Mekong Maiden in Disneyland's Jungle Cruise, in the possession of chimpanzees. 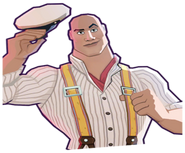