US$1,000,000
When Tim Burton was still a young animator at the Walt Disney Studios, he had an idea to make a terror film in black and white. Frankenweenie was to accompany the 1984 re-issue of Pinocchio, but Disney thought it was too dark and scary, and reserved the short for another use, leaving Burton frustrated and forcing him to leave the studio.

Victor Frankenstein (played by Barret Oliver) is an 11-year old boy who creates movies starring his dog, Sparky (a bull terrier, whose name is a joke on the use of electricity in the film). After Sparky is hit by a car, Victor learns at school about electrical impulses in muscles, and gets the idea to bring his pet back to life. He creates elaborate machines which bring down a bolt of lightning that revives the dog. While Victor is pleased, his neighbors are terrified by the animal, and when the Frankensteins decide to introduce the revitalized Sparky to them, they become angry and afraid.

Sparky runs away, with Victor in pursuit, and they find themselves at a local miniature golf course, and hide in its flagship windmill. The Frankensteins' neighbors, now an angry mob, arrive on the scene, and while using a cigarette lighter to try to see in, the windmill is accidentally lit on fire. Victor falls and is knocked out, but Sparky rescues him from the flames, in time to be crushed by the windmill. The mob realizes its error and use their cars, along with jumper cables, to "recharge" Sparky. He is revived, and all celebrate. Sparky later falls in love with a Poodle whose fur bears a strong resemblance to the hairdo of the Bride of Frankenstein.

Burton was fired by Disney after the film was completed; the studio claimed that he had wasted company resources and felt the film was too scary for young audiences. It had been scheduled to debut theatrically in the U.S. before a re-release of Pinocchio on Dec. 21, 1984, but was shelved. It did play U.K. theaters in 1985 in front of Touchstone Pictures' Baby: Secret of the Lost Legend. But after the mainstream success of Burton's features Beetlejuice, Pee-wee's Big Adventure and Batman, the film was given a home video release in 1994. It is currently available as an extra, along with Vincent, on The Nightmare Before Christmas DVD, Blu-ray and UMD for PSP.

Burton produced on a full length stop-motion remake of the film, which was released on October 5, 2012. 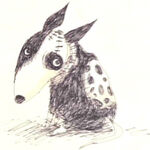 An old sketch of Sparky.

On the night Victor dig up at Sparky's grave.

Retrieved from "https://disney.fandom.com/wiki/Frankenweenie_(short)?oldid=4017683"
Community content is available under CC-BY-SA unless otherwise noted.