Switching between a car and plane
Franz (Von Fliegenhozen in plane mode) is a minor character in the 2013 Disneytoon Studios animated feature film, Planes.

Franz is a German Aerocar, and a huge fan of Dusty Crophopper. He is also a friend of Dusty and El Chupacabra, and hangs out with the racing competitors. He seems to change personality and voice pitch when turning into a plane. 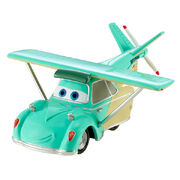 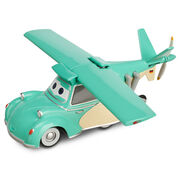