To enjoy the Christmas spirit

His uncle's attitude to Christmas

"Christmas a humbug? Uncle, you don't mean that!"
Fred is Ebenezer Scrooge's nephew in A Christmas Carol. He is also the only living relative Scrooge has left.

Fred is the complete opposite of Scrooge in the way that he loves Christmas, and he donates to charity. He offered Scrooge an invitation to his Christmas dinner, but Scrooge declined. Fred was also involved in Scrooge's visit from the 3 spirits.

In Scrooge's past, it was revealed to him that his sister, Fan brought him back from boarding school after being neglected by his father. Fan, however, died giving birth to Fred. In the present day, it was shown that Fred was making jokes behind Scrooge's back at the Christmas dinner Scrooge earlier rejected an invitation to.

In the future, Scrooge had died and Fred inherited all his wealth. After the visit of the three spirits, Scrooge changed for the better and attended Fred's Christmas dinner after all. 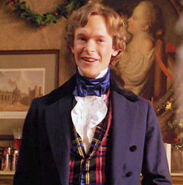 Fred as he appeared in The Muppet Christmas Carol

Donald Duck as Fred Honeywell
Add a photo to this gallery

Retrieved from "https://disney.fandom.com/wiki/Fred_(A_Christmas_Carol)?oldid=3859573"
Community content is available under CC-BY-SA unless otherwise noted.