Frederick Aaron "Fred" Savage is an American film and television actor, voice actor, comedian, director, and producer who is best known for his role as Kevin Arnold in the ABC comedy-drama series The Wonder Years from 1988 to 1993. He is the older brother of Boy Meets World star Ben Savage.

For Disney, Savage narrated the 1998 Disney direct-to-DVD film, Jungle Book: Mowgli's Story and voiced the Wego Twins in the Disney Channel animated series Kim Possible. He also directed and produced episodes of many Disney Channel television series, such as Hannah Montana and Phil of the Future. 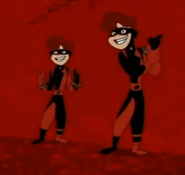 Savage as Louis with Max in 1986 fantasy comedy-drama film The Boy Who Could Fly.

Fred Savage with the Rescue Rangers on the cover of Disney Adventures (December 1990).