Frederickson Manor is the home of Fred and his family in San Fransokyo. It is also the place where the members of Big Hero 6 decided to become superheroes; and to test their gear before facing Yokai, in Disney's 2014 animated feature film that shares the same name as the team.

None of Fred's friends knew that he has a mansion for a house or that his family is well off, as Go Go had assumed that her fanboy friend lives under a bridge, until he brought them over to the mansion after getting chased by a masked supervillain. Once there Fred's family butler, Heathcliff lets them in and Fred showed them his superhero themed room; so they could dry themselves off and get heated back to warmth by Baymax. Some of Fred's hero posters and toys helped Hiro get the idea to strength Baymax's scanner and to "upgrade" his friends, so they could stand a fighting chance the next time they encounter Yokai.

Shortly after their battle with Yokai and saving the city, Fred invites the gang over a few times as he tries to convince them to continue Big Hero 6 even when they just want to go back to their normal lives, but when they saved the city again they decided to continue their new lives as superheroes. With the manor as one of their bases.

Concept art of the mansion

Family portrait (from which the secret hero lair is hidden behind)

Portrait of young Fred in the hallway

Portrait of Hero Fred, in his room 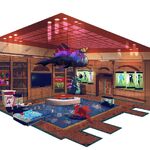